You are here: Home / Archives for fatigue 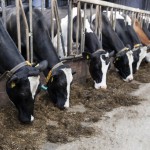 When German farmer Gottfried Glöckner began feeding his cows on GM Bt176 maize in 1998, he noticed strange symptoms appearing in the animals. They included partial paralysis (paresis), accompanied by severe fatigue and problems in the kidneys and mucous membranes, followed by death in 10% of cases. Initially the culprit was thought to be a bacterial or viral disease. … END_OF_DOCUMENT_TOKEN_TO_BE_REPLACED