You are here: Home / Archives for gas and oil 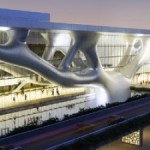 As ministers arrived at climate talks in the Qatari capital Doha, Greenpeace urged European countries not to take the side of Poland and Russia in a battle over whether to maintain the Kyoto Protocol’s biggest loophole and to make real progress on a deal to prevent catastrophic climate change. Europe has traditionally been seen as a progressive force in climate negotiations, … END_OF_DOCUMENT_TOKEN_TO_BE_REPLACED