You are here: Home / Archives for Global Catholic Climate Movement 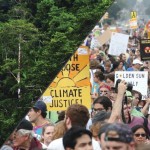 The Global Catholic Climate Movement announced a unique petition campaign to provide an easy way for Catholics to act and voice their concerns, ahead of the United Nations COP21 climate summit at Paris in December. The goal is to raise a strong Catholic voice demanding world leaders to commit to ambitious climate action, signing a meaningful treaty in Paris to tackle the … END_OF_DOCUMENT_TOKEN_TO_BE_REPLACED