You are here: Home / Archives for GM crops 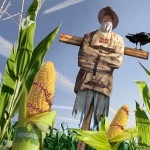 Non-governmental and farmer organisations from South Africa, Tanzania, Mozambique, Kenya and Uganda strongly condemn the go-ahead given by the South African GMO authorities for Monsanto to commercially sell its genetically modified (GM) "drought tolerant" maize seed for cultivation in South Africa. According to the groups, there is no evidence showing that the drought tolerant … END_OF_DOCUMENT_TOKEN_TO_BE_REPLACED