You are here: Home / Archives for grow 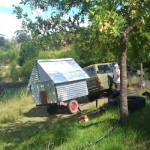 It's raining today. I didn't want it to rain right now but I am grateful for my plants to get this rain. The reason for not wanting rain is that we are up to our elbows finishing the chicken tractor. We offer you another installment by Sue Vingerhoets of Foxglove organic farm. This mobile hen house can be moved into place for the hens to work over a piece of ground and when … END_OF_DOCUMENT_TOKEN_TO_BE_REPLACED 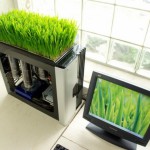 Self-described geek, Mike Schropp, built his own ‘bio computer’ in his basement to grow his own wheatgrass. Mike used various donated computers that he was able to disassemble to cobble together a working computer for his project. He had been looking for a project that allowed him to join his passion for technology with something organic, while allowing him to create a … END_OF_DOCUMENT_TOKEN_TO_BE_REPLACED