You are here: Home / Archives for hall 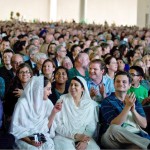 Nobody does pageantry like people of faith — and that was decidedly on display Thursday night as the 2015 Parliament of the World's Religions opened with a lengthy processional at the Salt Palace in downtown Salt Lake City. Chiefs from seven American Indian tribes, wearing traditional feathered headdresses and fur cloaks, led the way to the podium as a drum circle … END_OF_DOCUMENT_TOKEN_TO_BE_REPLACED