You are here: Home / Archives for horn 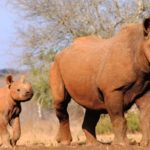 Two weeks into the New Year and already 11 rhinos have been found dead and dehorned in the Kruger National Park (KNP). Just hours after 2 suspected poachers were killed in the KNP, 3 more rhino carcasses were found on Thursday 12 January bringing the total rhino killings for 2012 so far, to 11. Following the gruesome discovery of the 8 adult rhino carcasses found in the … END_OF_DOCUMENT_TOKEN_TO_BE_REPLACED