You are here: Home / Archives for Kulula 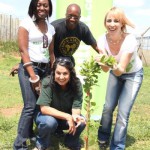 Kulula's Project Green programme, which aims to combat the atmospheric carbon loads and greenhouses gases released by its aircraft, has raised R1 million to support greening and mitigate climate change through Food & Trees for Africa (FTFA). By February 2009 Project Green had planted 2009 trees. Now, thanks to the thousands of Kulula fans who contributed money every time … END_OF_DOCUMENT_TOKEN_TO_BE_REPLACED