You are here: Home / Archives for Kusile 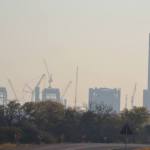 A further delay in the first synchronisation of Unit 6 at Medupi power station is increasingly likely. This was indicated at a briefing by Eskom's Medupi project manager, Roman Crookes, and the head of capital projects, Dan Morakane. The minister of Public Enterprises and other key stakeholders were being informed of this eventuality. In September 2014, the Medupi project … END_OF_DOCUMENT_TOKEN_TO_BE_REPLACED