You are here: Home / Archives for Limpopo Province 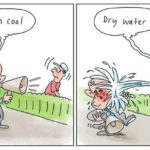 “Clean coal” is promoted as the lifeline that will allow governments to continue to depend on coal for energy generation. But there is no such thing as “clean coal”. South Africa is the biggest coal producer in Africa. Over the past 10 years alone, we have produced an average of 254 million tons of coal per year. 70 million tons of the coal we produce is exported, and the … END_OF_DOCUMENT_TOKEN_TO_BE_REPLACED