You are here: Home / Archives for mask 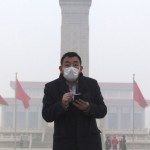 Air pollution in China, the world's biggest carbon emitter, has reached intolerable levels and the country should aggressively cut its reliance on coal, according to the National Center for Climate Change Strategy and International Cooperation. “China's pollution is at an unbearable stage,” Li Junfeng, director general of the state body that advises the government on … END_OF_DOCUMENT_TOKEN_TO_BE_REPLACED