You are here: Home / Archives for moroc 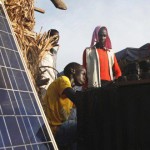 US President Barack Obama has unveiled a final set of rules to cut greenhouse gas emissions in a big initiative which would form a major plank of his legacy as he winds down his term in office. In what has been termed the strongest action ever taken in the United States to combat climate change, the rules will see the country’s hundreds of coal-fired—and polluting—power … END_OF_DOCUMENT_TOKEN_TO_BE_REPLACED