You are here: Home / Archives for NSIDC 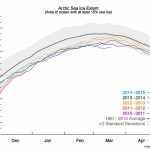 This year's maximum Arctic sea ice extent was the lowest in the satellite record and occurred 15 days earlier than the average date for the period from 1981 to 2010, reported NASA and NSIDC. The sea ice cap of the Arctic appeared to reach its annual maximum winter extent on Feb. 25, according to data from the NASA-supported National Snow and Ice Data Center (NSIDC) at the … END_OF_DOCUMENT_TOKEN_TO_BE_REPLACED