You are here: Home / Archives for patterns 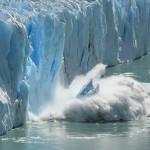 Arctic sea ice is melting at a record pace - and every summer looks grimmer. This past summer saw the ice pack at its fourth-lowest level on record, and the overall trend in recent decades suggests this will only continue. "Using satellites, scientists have found that the area of sea ice coverage each September has declined by more than 40 percent since the late 1970s, a … END_OF_DOCUMENT_TOKEN_TO_BE_REPLACED