You are here: Home / Archives for power failures 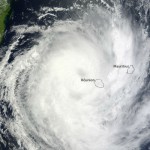 Nearly 70,000 homes were left without electricity during the first week of January 2013 after tropical storm Dumile struck the island in the Indian Ocean. Winds of up to 180 kilometres per hour and torrential rain caused extensive damage to the electricity network and Electricite de France (EDF), which supplies the island said power to 68,000 homes had been cut. The cyclone … END_OF_DOCUMENT_TOKEN_TO_BE_REPLACED