You are here: Home / Archives for power plant 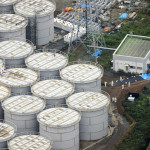 Operators of Japan’s damaged nuclear power plant Fukushima have warned that it will take a further four years to fix the problem of contaminated water leaks. The admission was made as a sombre nation prepared to mark the fifth anniversary of the March 11, 2011 earthquake and tsunami, which triggering the world’s worst nuclear disaster in decades. The problem of dealing … END_OF_DOCUMENT_TOKEN_TO_BE_REPLACED