You are here: Home / Archives for sable antelope 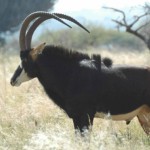 It was hoped that the presence of the Zambian antelope would be a lifeline for the survival of the giant sable, described as critically endangered on the Red List of Threatened Species. It was feared that the giant sable had completely died out in the wild because of the effects of the Angolan civil war. Then two small populations of these majestic antelope with their … END_OF_DOCUMENT_TOKEN_TO_BE_REPLACED