You are here: Home / Archives for sales 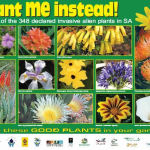 Invasive Alien Plants (IAPs) are widely considered as a major threat to biodiversity, human livehoods and economic development. IAPs cost South Africa tens of billions of rand annually in lost agricultural productivity and resources spent on management. On 1 August 2014, the Minister of Environmental Affairs published the Alien and Invasive Species Regulations (“the … END_OF_DOCUMENT_TOKEN_TO_BE_REPLACED