You are here: Home / Archives for tournament 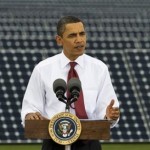 The most famous seat of power in the world, the White House, is going solar. This announcement precedes the world's most widespread political demonstration ever, calling for leaders to act climate change. Barack Obama's Secretary of Energy, Steven Chu, today announced that by early 2011 solar panels on the presidential mansion will be generating hot water and electricity. … END_OF_DOCUMENT_TOKEN_TO_BE_REPLACED