You are here: Home / Archives for vegatarian 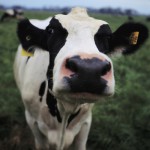 800 million of the one billion starving people in the world would have food to eat if Americans all became vegetarian. This is according to figures released by Cornell University’s College of Agriculture, and published in the recent December 28 issue of Scientific American. According to the article, “grain currently fed to some seven billion livestock in the United States … END_OF_DOCUMENT_TOKEN_TO_BE_REPLACED