You are here: Home / Archives for venice 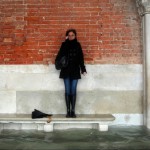 Three people died when their car fell off a collapsed bridge on Tuesday, as flooding battered central Italy for a third straight day, forcing part of Italy's main north-south highway to close. Water levels were receding, however, in Venice, the lagoon city and Unesco world heritage site that at the weekend saw its sixth-worst flooding since records began in 1872. St … END_OF_DOCUMENT_TOKEN_TO_BE_REPLACED