You are here: Home / Archives for voluteers 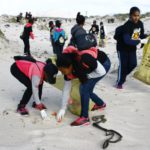 More and more people are pitching in to clean our beaches. This past Saturday (17 September 2016) was the 20th year that South Africa participated in the annual International Coastal Clean-Up. Coordinators, volunteers and sponsors who participated in this year’s event, described it as one as the biggest and the best since South Africa officially became part of the … END_OF_DOCUMENT_TOKEN_TO_BE_REPLACED