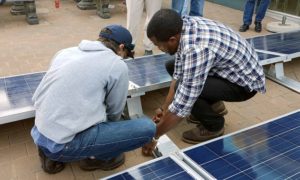 South Africa’s government, energy regulator and Eskom have often been criticised for obstructing the introduction of distributed, small-scale embedded generation, which would help businesses to cut costs and ensure the stability of their power supply during load shedding.

But in fact, there are significant and far-sighted tax breaks which have been put in place by National Treasury to encourage and incentivise business owners to install their own generation in the form of grid-tied, rooftop or ground-mounted solar PV systems on buildings, parking lots, warehouses, factories, and farms.

From 1 January 2016, a little-known amendment to Section 12B of the Income Tax Act (Act 58 of 1996) allows for depreciation in the year of commissioning of the full (100%) cost of a grid-tied solar PV system of less than 1 MW used for electricity generation by a business in the course of its operations.

The capital depreciation allowances for solar PV systems greater than 1 MW remained unchanged in the January 2016 amendment to the legislation, which continues to allow full depreciation over three years. This permits depreciation of 50% of the capital cost in the year of commissioning, 30% in the subsequent year, and 20% in the third year.