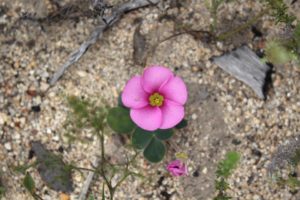 In three recent papers, South African biologists and environmentalists have listed pertinent research priorities for the next decade. These could help steer the protection of the country’s plant and animal wealth, and that of the Cape Floristic Region in particular. The authors believe that the priorities set out could go a long way in addressing key threats raised in the National Biodiversity Assessment, released earlier this month.

The articles were drafted through a collaborative effort between local and international scientists. Issues such as environmental change, disasters, fencing, the wildlife trade, accelerated land reform and land use changes are highlighted. The researchers involved say the issues raised are often cross-cutting and interdisciplinary. In most cases, solving them requires a joint effort between researchers in the biological and social sciences and humanities, as well as much-needed buy-in from communities, practitioners and members of the public.

“A key message emerging from all three of these papers is that the biological sciences alone cannot solve the challenges facing our biodiversity,“ says Prof Karen Esler of Stellenbosch University’s Department of Conservation Ecology and Entomology, who contributed to all three publications. “It will also require interdiscipinarity, strategic communication, education and engagement.

Focus on the Mediterranean region

A paper setting out research priorities for the Cape Floristic Region (CFR) was published in the South African Journal of Science. The CFR is one of the key Mediterranean climate regions, and one of the world’s six unique biomes.

Seven themes are listed as priorities and activities for its conservation over the next decade.

The paper was co-authored by Nicky Allsopp of the Fynbos Node of the South African Environmental Observation Network (SAEON), Dr Jasper Slingsby of SAEON and the University of Cape Town and Prof Karen Esler of Stellenbosch University.

“The conservation community whose opinion we sought recognises implicitly that research in multiple disciplines as well as interdisciplinary approaches are required to address societal, governance and biological issues in a changing environment to secure the conservation of the Cape Floristic Region,” says lead author Nicky Allsopp.

The drafting of priorities for the Cape Floristic Region flows from a much broader collaborative effort that collated the imminent research concerns for the world’s Mediterranean climate regions. From government officials, researchers and environmental consultants to landowners, farmers, business people and the mining sector were surveyed.

The effort was organized jointly by members of the Society for Conservation Biology—Europe Section, a network of professionals working on biodiversity conservation, and the International Society of Mediterranean Ecologists (ISOMED). The latter promotes research, conservation, and public awareness of the biological diversity of the world’s Mediterranean-climate regions that typically experience dry summers and wet winters. These regions include several biodiversity hotspots spread across five regions of the planet (Europe, Africa, North and South America, and Australia). In South Africa, the Western and part of the Eastern Cape typically experience such climates, and the region’s unique fynbos biodiversity is partly a result of it

Research priorities for the world’s Mediterranean climate regions were listed in a paper in the journal Conservation Science and Practice. Overarching issues such as climate change, the governance of human activity inside and outside of protected areas, the management of fire and species, as well as the need for greater public engagement are listed. Lead author of the paper, Francisco Moreira, is associated with two Portuguese universities and the Society for Conservation Biology.

In an unrelated exercise, a paper framing biodiversity conservation priorities for South Africa appeared In Ambio, a journal about the human environment. With Colleen Seymour, principal scientist of the South African National Biodiversity Institute in Cape Town as lead author, it was collaboratively compiled by 17 South African researchers from local universities and research institutions.

According to Seymour, the emerging priorities identified stem from the first so-called “horizon scan” for biodiversity conservation in the country and on the African continent.

Horizon scans highlight emerging scientific and social priorities that are either new or may be experiencing a sharp increase in intensity in the next five to ten years, and if tackled appropriately could have the biggest impact.

The ten most important emerging threats and opportunities facing the conservation of South Africa’s biodiversity are (in no particular order):

According to Seymour and her co-authors, none of these emerging issues is truly “unsolvable” or “chaotic”. Three out of the ten issues can be resolved by improved science alone, but the remainder would require social, economic and political engagement with communities and policy makers.

“Many of the issues are relevant to other countries in the region, if not the continent, given the shared socio-economic and biodiversity characteristics of many African countries,” she adds.