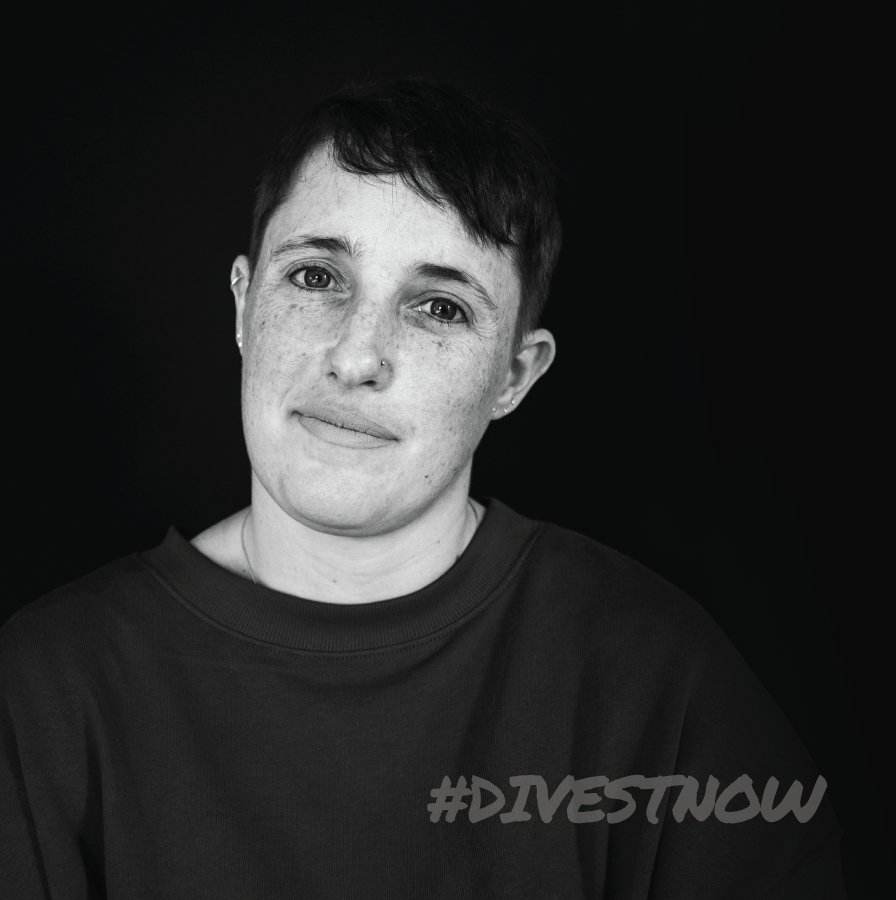 “I worry that the impacts of climate change may become catastrophic if we don’t act in time. Stopping the flow of money into fossil fuels is a no-brainer to protect our future.” Melita Steele, Greenpeace Africa

South Africans are threatened by climate change, by the health and environmental impacts of fossil fuels – coal, gas and oil – and by the role of parts of the fossil fuel industry in state capture and in holding back wind and solar energy development. To build a just, sustainable, and healthy future for all South Africans, we need ethical savings and investments in our economy that support long-term social development and a healthy environment.

As individual savers and as members of communities holding joint investments (including companies, universities, religious bodies, stokvels, municipalities, and NGOs), we pledge our support to the global movement to divest from fossil-fuel assets to help avoid catastrophic climate change. We are ready to divest.

We want our savings to support a swift, fair, South African and global transition to a socially just, cleaner energy economy and a climate that is safe for ourselves, for vulnerable communities, and future generations; and that takes care of workers in the fossil fuel industry. We do not want our money invested in destructive and increasingly stranded fossil-fuel assets while the rest of the world moves to invest in new energy technology. 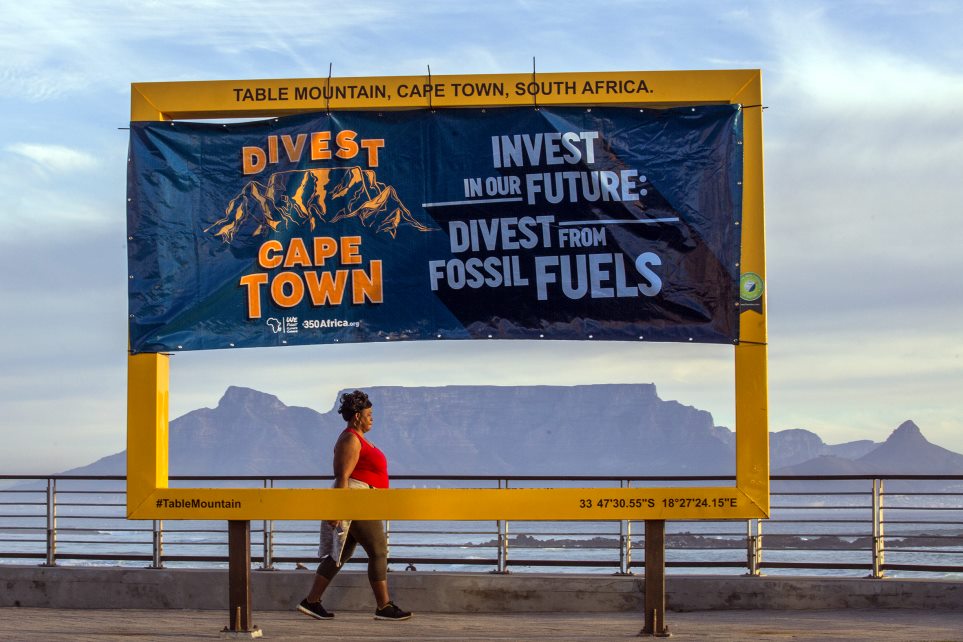 A 350Africa banner calling for Cape Town to divest from harmful fossil fuels hangs over a view of Table Mountain in Blouberg. Image: Jennifer Bruce / 350Africa

‘Over the past three years, the most profitable economic sector in South Africa has been financial services,’ said David Le Page, Fossil Free SA coordinator. ‘Yet despite their claims to being socially responsible corporate citizens, none of South Africa’s top asset managers are committed to helping citizens invest without doing harm. Most continue to invest in fossil fuels, and have not committed to supporting vital conventions on climate change, such as the Paris treaty. As Bill McKibben has said, “If it’s wrong to wreck the climate, then it’s wrong to profit from that wreckage”.’ 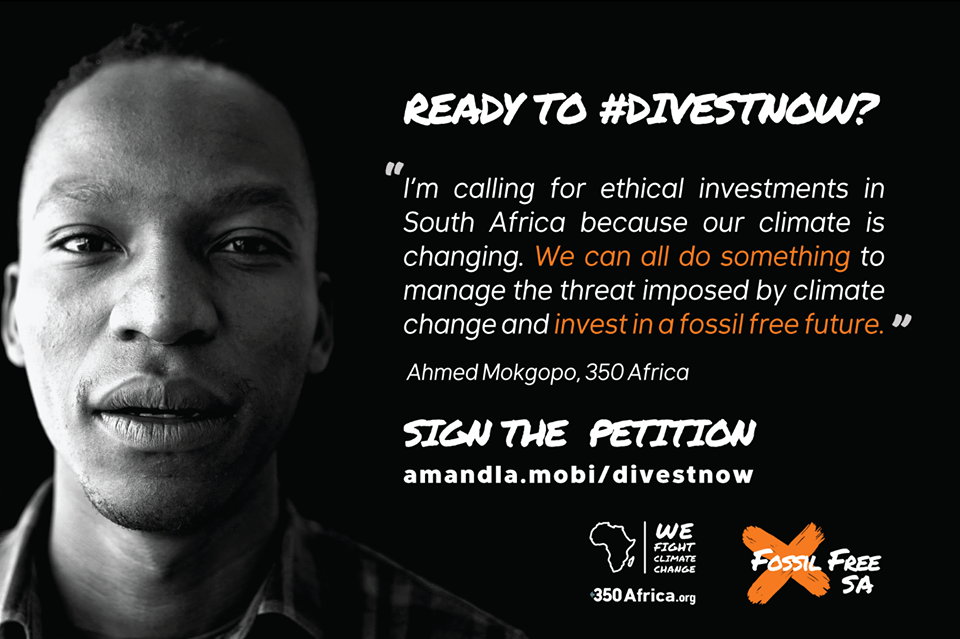 ‘South Africa is most vulnerable to climate change: most recently, 50,000 seasonal workers in the Western Cape have lost work as a result of the Cape drought, creating great suffering. We think it’s time that our top asset managers start making it easy for principled investors to stop investing in fossil fuel companies like Sasol. Europe, the US and Australia, among others, have well-developed ethical investment sectors, but South Africa lags behind.’

‘Our big asset managers protest that there is no public demand for ethical investments in South Africa, and it’s not financially viable for them to offer fossil fuel-free funds. We believe that in fact most South Africans, once they understand the issues, would far prefer not be invested in declining industries that are wreaking havoc with the environment. We call on our world-class asset managers to help investors and citizens who are committed to the vital mission of stopping climate change. And we welcome volunteers for profiling in this social media campaign.’ 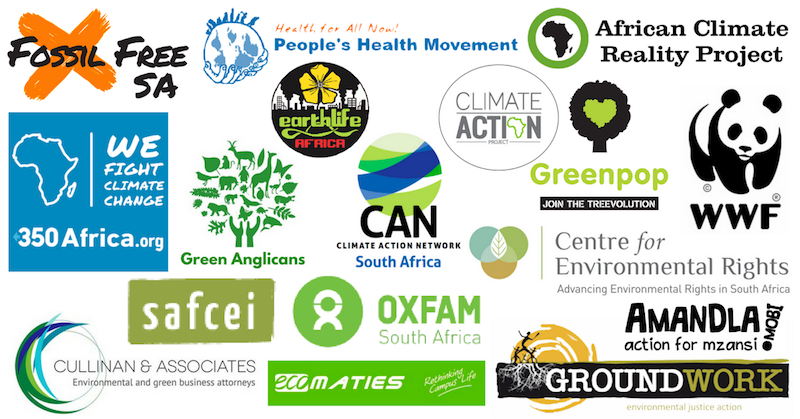 Emphasing that climate change is a major human rights issue, the campaign has been endorsed by and will profile the new secretary general of human rights organisation Amnesty International, Kumi Naidoo.