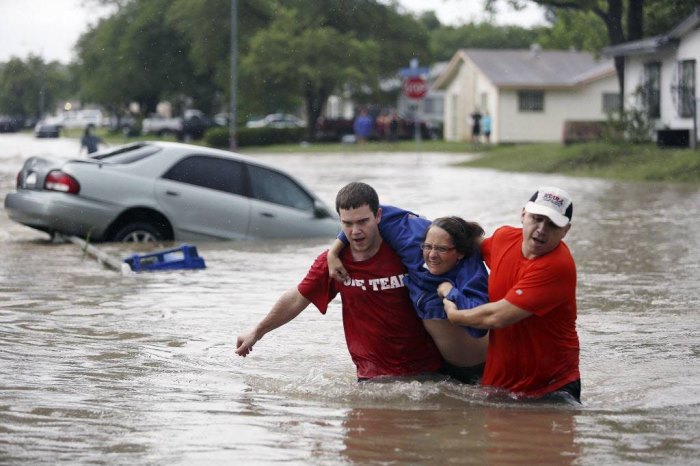 Three more bodies have been found in the flooding in Texas, officials said Saturday, bringing the total to 24 in a state walloped this week by heavy rains and powerful storms. Another seven people have died in Oklahoma.

The three latest deaths were announced by officials in Hays County, where a group of people got swept away while in a vacation house last weekend. The identities of the victims were not released, so it was not immediately clear if they were people who were already listed as missing.

The news came as volunteers trudged through banks of the Blanco River looking for the group whose vacation house in Wmberley, a tiny town an hour outside of San Antonio, got swept off its foundation.

A thousand volunteers made up more than 70 search teams looking for the missing.

Among those they are looking for is 6-year-old William Charba and his father, Randy Charba, 42. The body of his wife, Michelle Carey-Charba, was found Wednesday, while officials said Friday that they identified the remains of her father, Ralph Carey, 73. Her mother, Sue Carey, 71, remains missing.

The father in another family, Jonathan McComb, survived the ordeal. His family had joined the Charbas and the Careys for the holiday weekend.

McComb’s wife, Laura, 33, and daughter, Leighton, 4, still haven’t been found. The body of their 6-year-old son, Andrew, was discovered Wednesday in the river.

Meanwhile, fresh storms swept the rain-soaked Dallas-Fort Worth area Saturday morning, capping off a week of wild weather for the whole region.

Officials and meteorologists were also keeping a close eye on rising river levels in southern Texas as floodwaters moved downstream from the north.

The National Weather Service issued a flood watch for portions of Central and South Texas. Dallas got about six inches on Saturday morning, NBC Dallas-Fort Worth reported, before the rain eased off as a cold front moved into the state.

On Friday, more than 200 people were rescued from flooding in Dallas.

Even with a break in the deluge, the danger isn’t over: Rivers and lakes around cities such as Houston, San Antonio and Dallas have all swelled.

Meanwhile, the Colorado River at Wharton was expected to crest around midday Saturday, which could flood the area some 60 miles southwest of Houston. While it was worth watching the Colorado, it would most likely not turn into a major flooding event.

“I wouldn’t want to be walking around that river and it will be a major nuisance, but it is not an all-time record,” Tom Moore, the Weather Channel’s coordinating meteorologist, said.

The Brazos River had been receding but rose above flood stage again Friday in Parker County, west of Fort Worth. Residents in about 250 homes were asked to evacuate.