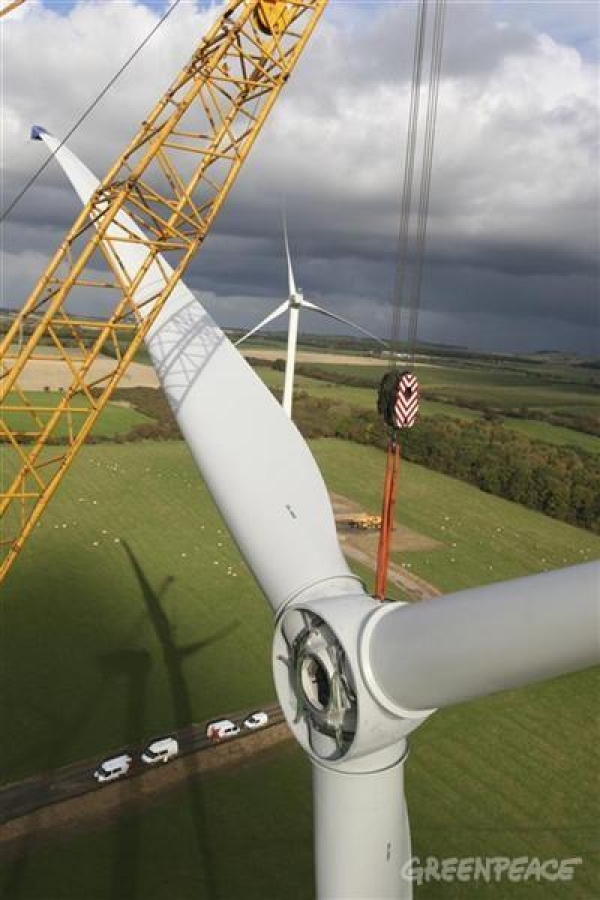 Construction of the new wind farm in the UK, which consists of 10 turbines with a total power of up to 30MW. Image: Steve Morgan / Greenpeace

South Africa can create around 150 000 new jobs in the energy sector in the next 20 years, and at the same time safeguard against catastrophic climate change – according to Greenpeace’s new ‘Advanced Energy [R]evolution’ report.

‘The Advanced Energy [R]evolution‘ is a detailed and practical blueprint for cutting carbon emissions, replacing fossil fuels and nuclear power with renewable energy, and growing the economy. It is one of the most comprehensive plans to resolve the country’s need for energy security and a sustainable energy future, ever.

The report shows that renewable energy is mature, ready for implementation, and can be deployed on a large scale. It means that as renewable energy is scaled up, we can start phasing out coal, an energy source incompatible with the goal of avoiding runaway climate change.

Why a ‘[R]evolution’? Well because our current energy mix requires an evolution, AND a revolution. We need a [R]evolution because we are already living on the frontline of the impacts of climate change, and if we are to avoid “runaway” climate change, we need to start acting today.

As the largest CO2 emitter on the continent, and the 12th largest in the world, South Africa has a moral responsibility to implement a coordinated, coherent, efficient and effective response to the global challenge of climate change.

When Greenpeace talks about an Energy [R]evolution, they are basically talking about a new vision for the future based on sustainable, secure energy production and green jobs. This will require innovation and a major mindshift in terms of what works, and we don’t expect this kind of change to be easy, but it is definitely possible.

The ‘Advanced Energy [R]evolution’ scenario is a practical solution to the global problem of climate change. But in addition, it also presents the incredible opportunities that the path of sustainable development can provide for all South Africans.

The report is based on Greenpeace’s global Advanced Energy [R]evolution scenario, and was developed in conjunction with specialists from the Institute of Technical Thermodynamics at the German Aerospace Centre (DLR), the Dutch Institute Ecofys, the Institute for Sustainable Futures (Sydney) and the European Renewable Energy Council.

An Energy [R]evolution driven by the creation of green jobs, and the vision of a sustainable and clean future, must be the result of political action taken today. The transition away from fossil fuels will open up exciting new opportunities in skills development, manufacturing and infrastructure development.

“Our Advanced Energy [R]evolution scenario shows how to eliminate dirty energy, and thereby avoid the massive cost burden of building Kusile coal-fired power station and 6 new nuclear reactors “because there is simply no need to build them,” said Sven Teske, Greenpeace International’s senior energy expert and co-author of the report.

The electricity sector will be in the vanguard of the renewable energy revolution, despite the fact that more than 90% of the country’s electricity currently comes from coal.

According to Melita Steele, climate campaigner for Greenpeace Africa, ‘Almost half of South Africa’s energy needs could be sourced from renewable energy by 2030, rising to 94% by 2050. This is more than double what the South African government is aiming for in the Policy Adjusted Integrated Resource Plan.’

Lowering carbon emissions is as much about electricity generation as it is about saving energy. Energy efficiency offers some of the simplest, easiest and most cost effective measures for reducing both greenhouse gas emissions and costs to end-users.

Carbon taxes, emissions trading and removing government subsidies will all result in the cost of fossil fuels increasing, perhaps to a level that truly reflects the damage they cause. As fossil fuels are phased out, it will be necessary to protect those poorest and most vulnerable to energy price increases, and energy efficiency presents major opportunities for people to be protected from the costs of rising energy prices.

Avoiding runaway climate change will require the most far-reaching structural reforms carried out by human society. Business as usual is simply not an option. Furthermore, there can be no half measures, or falling short of the required emission reductions. The risk of passing the threshold of runaway climate change is not one that humankind can afford to take.

Do our leaders have the vision?

But the good news, as this report shows, is that there are substantial gains to be made by creating an Energy Revolution and taking action on climate change. It’s a revolution that’s good for the climate, the economy, job creation, and South Africa’s future.

“This report clearly demonstrates that there is no technological barrier to achieving a pathway to 100% renewable energy. In fact, with the political will and South Africa’s abundance of renewable energy resources, the country could easily become the renewable energy leader in Africa. As host of the international climate negotiations COP17 in Durban at the end of this year, the South African government must make the right choices now to create a better and cleaner future for all”

‘The question is whether South Africa’s leaders will have the vision and the courage to seize the day and shape the future,’ Melita concluded.