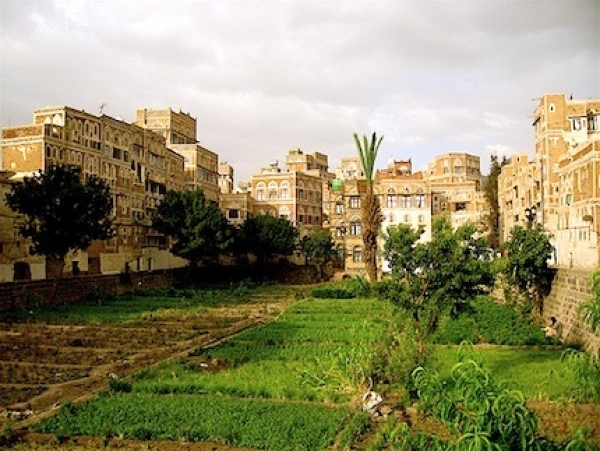 The Italian writer Alberto Moravia once described Sana‘a as a “Venice of dust.” Since his visit, the streets have been paved with stone, and the dust is less in evidence. But the first impression is still one of sun-dried palazzos, of deep-cut streets flowing with people but devoid of moisture and vegetation. Amid this, it’s easy to overlook the quiet spaces in between. And that is the only way most of the city’s gardens can be seen at all: by overlooking them.

Climb to the fifth floor of my house, and two gardens reveal themselves. To the east is Maryam’s, the miqshamah of Khudayr Mosque, a rectangle of green—mostly chives (bay’ah), the dominant garden crop—subdivided by little banks of raised earth. To the west, there is Bustan Na’man.

Go up another couple of floors, and the tops of what are locally called “pepper trees” mark the edges of other gardens, otherwise unseen. A bit more than a stone’s throw to the south, there is another miqshamah, totally concealed behind a curtain wall of tower houses: I didn’t even know it was there until I began to write this and looked at the map. Other great Islamic cities, such as Damascus and Bukhara, are famous for the gardens that surround them, but in Sana‘a, they are all on the inside, walled gardens wrapped in a walled city, doubly hidden.

Altogether there are 43 of them. They range in area from nearly three hectares (7.4 acres) down to less than 1000 square meters (10,500 sq ft), all within the ring of mud wall and bastions that protects the historic core of Sana‘a. Only a handful are visible at all from street level, and of these, one alone, Miqshamat al-Qasimi, can be seen in its entirety. The unsuspecting visitor would never guess that these urban oases occupy 13 percent of the space within the city wall. 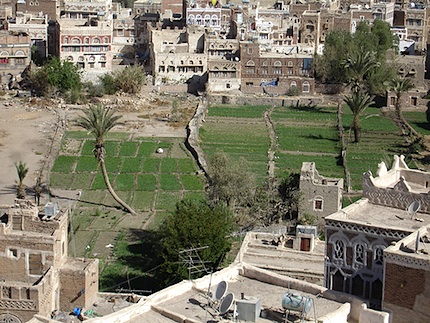 Most of them bear that ancient name, miqshamah, and most are also attached to nearby mosques as waqf, property of a foundation and inalienable under Islamic law. A few, known by the more usual Arabic name bustan, are held by individual families. None are public parks (except for the fortunate eyes of neighboring householders). Whether stadium- or backyard-sized, miqshamah or bustan, they were all founded as working market gardens.

Tim Mackintosh-Smith lives in an ancient tower house off the “Market of the Cows” in the old city of San’a, Yemen. He is the author of the Yemen: Travels in Dictionaryland (1997) and Yemen: The Unknown Arabia (2000).