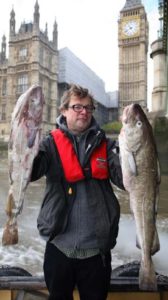 Hugh Fearnley-Whittingstall, celebrity chef and food campaigner, tackles the subject of “discard” – and the waste of fish in our oceans.

Half of all fish that is caught in the North Sea is thrown back dead. That is the tagline of the Fish Fight Campaign fronted by celebrity chef and food campaigner Hugh Fearnley-Whittingstall. But how can people get involved?

What is the Campaign?

Due to tight quotas imposed on the fishing industry by the EU Common Fisheries Policy, fishermen have no choice but to throw back surplus fish they catch into the sea – called “discard” – or receive heavy fines for overfishing when they land. This results in a huge amount of waste, and what the campaign calls “a senseless waste of food”. The Fish Fight has been received enthusiastically by fishermen, the public, conservationists and politicians; all eager to reduce this phenomenal amount of waste.

It seems ironic that the quotas that were put in place to protect fish stocks and overfishing are actually achieving the opposite.

On 16th November 2010 Hugh travelled to Brussels to attend the Common Fisheries Policy reform meeting “Another Future for Fish”. He writes on his River Cottage blog: “Fishery stakeholders from all over Europe were present, and many of them agreed to join the Fish Fight Campaign” and reveals that he was also able to get an interview with “head honcho” Maria Damanaki, Commissioner for Maritime Affairs and Fisheries.

The campaign has also received huge public support, with 20,000 people signing up to support it in just 27 hours.

Hugh Fearnley-Whittingstall has already changed consumer opinions on mass-produced chicken, in his successful Chicken Out campaign. It seems as though Hugh and his team are set to repeat their success with the Fish Fight, if this early support is anything to go by.