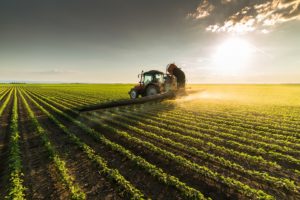 Called “crop protection solutions” by producers, 67 agrichemicals which are banned in the EU remain legal in South Africa.

An article published in September this year exposed the double standards of the EU in which the region was found to export (and obviously profit from) the self-same pesticides that they deem too poisonous for use in their own fields.

One such pesticide is paraquat, a substance so dangerous that one sip can be lethal. The deadly pesticide was first marketed in 1962, but has been banned in the European Union since 2007 and in Switzerland since 1989, on the grounds that it is too dangerous for European farmers even when wearing protective equipment.

Dr Gerhard Verdoon of the Griffon Poison Information Centre, an organisation that endeavours to rid the country of illegal poisoning, explains that Paraquat, also known as Gramoxone, is a herbicide which destroys all tissue.

“It eats away at your mouth, your oesophagus, your stomach… it burns up everything inside. If you ingest it, it’s tickets.”

While certainly unethical, the selling of such poisons to developing nations is perfectly legal and, as the market goes, South Africa stands near the front of the queue as one of the largest pesticide importers on the continent, with most use concentrated in the Western Cape.

Ethics has a human face. The constitutional rights of countless South Africans are being systematically violated by the use of these pesticides. As such, there is a strong legal case to be made requiring government to embark on a comprehensive process of law reform on the effective regulation and enforcement thereof of agrochemicals in order to comply with constitutional regulations.

Ineffective legislation puts everyone at risk

While ineffective legislation or a lack of implementation thereof affects everyone (as consumers of commercially farmed products), as is so often the case, it is the poor who are most at risk. Farm workers, those living on or near farms, groundsmen, urban gardeners, municipal workers, unborn children, newborn children, and children living in areas where these chemicals are used are all likely to be regularly exposed to a cocktail of agrochemicals whose combined chronic effects are still to be understood.

In the Winelands, residents know when the vineyards are being sprayed. Headaches, nasal congestion and itchy eyes are to be expected during this time. Those who’ve never before suffered from hay fever, appear to develop it overnight, in sync with the spraying regime of the local farms. But this is the milder reality of those of us living in the nearby towns. For those living and working on the farms themselves, the potential impacts are far less benign, as organisations like “Women on Farms” attest.

Pesticide exposure causes a range of health problems from rashes, burning eyes, dizziness, nausea, vomiting, headaches, acute/fatal poisoning, developmental problems in children, reproductive disorders for both men and women, immune and endocrine system dysfunction, to nerve and brain damage, cancers, asthma, and more.  Yet workers and farm dwellers have little protection from exposure owing to lack of safety precautions and basic protective gear (such as masks and gloves) as well as little to no health care access.

Tatina is a 54-year-old worker. She describes the white layer of pesticide still present on grapes when she used to enter the vineyards where she was expected to work with her bare hands. When she asked the farmer about it, she was told that the residue was food for the leaves and harmless. She is no longer able to work due to respiratory problems.

“We and our children are exposed every time they spray. There is no warning, and our homes are in the midst of it.”

According to research conducted by Women on Farms, 73% of seasonal women workers are exposed to pesticides without any protective clothing and more than half are forced to return to vineyards within an hour of spraying. Many don’t even see this as an issue and it’s not uncommon to see women spraying crops while their baby sleeps on their back.

While pesticide reduction policies are the norm in many nations, this only happens in South Africa if the EU (the same market selling these products in the country) demands it. What’s worse is that while export crops are well tested, crops for local consumption are not and produce which is rejected for export on the basis of pesticide residue is simply then sold locally.

Another irony is that all the responsibility of using the poison falls to the user, which is often a relatively uneducated farm worker, municipal worker or groundsman. The pesticide label is regarded as a legally binding document whereby using the product in any way other than what is stated on the label renders you liable to penalty. Speaking at a recent webinar on the topic of pesticide legislation in South Africa, Prof Hanna-Andrea Rother, Head of the Division of Environmental Health at the University of Cape Town, explained that this protects the industry from liability.

Susannah Cowen, senior counsel for Thulamela Chambers, described six critical and necessary interventions that were submitted to government after a series of consultative processes with civil society. This called for comprehensive reform to the legislative framework regarding the regulation of chemical remedies recognizing that the current system is outdated, fragmented and ineffective.

Even without these legislative reforms, Angela Andrews, an environmental lawyer, argues that even just by employing the National Environmental Management Act of 1998 (NEMA), we should expect the use of such chemicals to be regulated. Yet this is not happening.

Although the legal route is critical, it’s not the only intervention available. People need to be educated on the dangers of such chemicals at every level so that there is widespread advocacy for change.

Prof Leslie London, Chair of Public Health Medicine in the School of Public Health and Family Medicine at the University of Cape Town, emphasises that that despite an employment crisis and an abundance of available labour, municipalities would rather invest in poisons than in labourers to weed roadsides. He questions why programmes like Working for Water employ the use of highly toxic herbicides effectively poisoning the very water for which they purport to be working.

The simple reality is that exposure reduction is key, the elimination of highly hazardous pesticides is long overdue and relying on labels alone to educate is misguided at best and willfully negligent at worst. It’s high time that government stepped up to protect its citizens and that the citizenry took up the mantle to advocate for this basic right.

By Anna Shevel and Carolyn Cramer

Carolyn Cramer is a communication specialist working with the Southern Africa Food Lab and the Centre for Complex Systems in Transition to help bring key societal and sustainability issues to the fore. Carolyn also heads up Coz it Counts PR & Communications Agency.