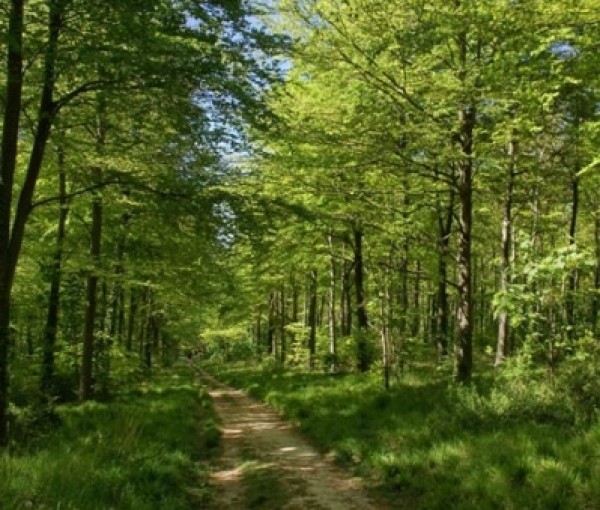 In the spring of 2006 I decided to plant a tree. Not because it is environmentally correct to do so, or because people now donate trees to counter the pollution from their air trips, or because I have measured my carbon footprint. It was simpler and more heartfelt than that. I had been involved in the publication of two books that generated many thousands of pages of proofs. I had worked with and been responsible for the mounting reams of paper. When it was over, after an intense period of six months, a feeling was left like a clear imprint: plant a tree.

I was living in an apartment with no garden. In the ensuing weeks I began looking for a home for the tree, read up on indigenous species, and spoke with people working in the field. But as perhaps often happens, the answer came naturally, in its own time, and was near at hand. I decided on the small nature reserve close to where I lived, made a few phone calls, and arrived at the reserve on the last day of arbour week with a young Cape Ash tree and a bag of bone meal.

The caretaker of the park helped me to select a site and dig the hole. It was a warm day and we sweated a little with the spade and boulders and trying to set up a stake and a ring of chicken-mesh fencing to keep the grysbokkies from eating the leaves. The hole wasn’t as deep as I’d wanted it, but he seemed sure that it was all that was required, and I let go, as if to nature herself.

I suppose that may have been the end of it in my mind, other than for occasional return visits to see the tree’s progress. But it turned out that the irrigation system to that far part of the reserve was not working. I knew that a sapling wouldn’t survive without water through the heat of summer, and from what I’d seen it was apparent that help would not be forthcoming from the under-resourced management channels.

And so it was that I was drawn in closer to the life of the young tree. Throughout that spring and the long hot summer that followed I watered the tree by hand. Every second evening I would make trips with a bucket back and forth to the nearest tap some distance away. I had to get the timing right – too early and it would be uncomfortably hot, too late and the reserve would be darkening and I would be alone.

But of course I was never alone. Over weeks and months I gradually moved from a mentality of “getting the tree watered” to one that was slower, more present, more grateful. One scorching late summer afternoon I walked past two hares resting in the sand, their legs stretched out before and behind them, alert but motionless. I could see my reflection in their eyes and see their sides rising and falling rapidly as they breathed. Was it the heat, or fear of me? And yet they did not move, allowing me to pass close by them. I felt as if I had been accepted on the edge of their world in some small way.

Sometimes I carried a daypack with pieces of fruit inside, in the hope of meeting one of the few remaining tortoises living in the park. Occasionally our paths crossed and I was given the joy of slicing a mango for them, and watching them eat it in their unhurried way. When they had had enough they would simply wander on. It seems that nature does not over-indulge. But mostly I did the evening watering alone. I used the long repetitive walks to and from the tap as a meditation. Sand filled my shoes and insects accompanied me, but it became an unexpected sanctuary.

One day early the following spring I arrived to find a circle of wildflowers growing around the little tree. I felt graced by the life I was witnessing. Not knowing anything about trees I continued to check the tree’s leaves, colour, and new shoots, and before leaving the park I would ask the huge Roman pines growing close by to keep the young tree in their protection.

The seasons turned, and the next winter I left to live in the city. For months I felt shocked and rootless, affected by the harsh restless edge of urban energy, and lacking the hills and connections in nature. Until I came upon a tree-park while on a run one morning, and it steadied me. Day after day I have passed through it; plane trees, cork trees, yellowwoods, oaks, and deep spreading fig trees. I stopped the other day and rested in between the roots of a fig tree, which held me like arms. For the first time since arriving in the city I felt received and contained.

I remembered how it is said that the Buddha was born under a tree, reached enlightenment under a tree, and passed on under a tree. I remembered Little Tree growing in the nature reserve, and the poem to all trees everywhere that broke from my heart on a fragrant hillside years ago….

This morning the grey-green fynbos,

gave me a gift as I ran,

they showed me how to live,

how to stream forth one’s essence

because it is our fulfilment to do so,

our communion with life.

And as I ran on these beloved hills,

along the dusty, rooted path,

with each deep in-breath as I passed