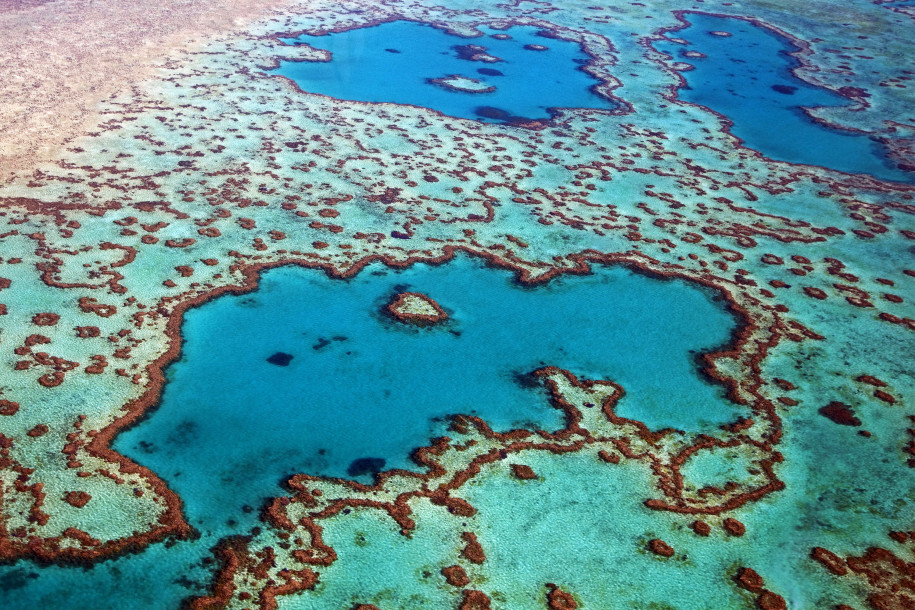 An aerial view of Heart Reef, a small part of the Great Barrier Reef, off Queensland, Australia. Image Getty

The Great Barrier Reef has been declared dead by scientists at 25 million years old — bringing an end to the colorful life of the world’s largest single structure of living organisms.

The incredible Coral Sea wilderness, which stretches for roughly 1,400 miles over an area of roughly 133,00 square miles, has finally succumbed to bleaching.

The icon of the natural world is bigger than the whole of the United Kingdom and is composed of over 2,900 individual reefs and 900 islands.

The reef lies off the coast of Queensland in Australia and can be seen from outer space.

“The Great Barrier Reef of Australia passed away in 2016 after a long illness. It was 25 million years old.”

The reef is commonly referred to as the world’s largest living thing but it is actually made up of billions of tiny organisms.

The world’s largest living thing is a 2.4-mile-wide honey fungus stretching across the Blue Mountains in Oregon.

No more nutrients for coral after unprecedented bleaching

The Great Barrier Reef has been declared dead by scientists investigating coral bleaching, which is caused by environment stress impacts. The warming of the oceans because of climate change causes corals to expel their algae and become bare.

Without the algae, the coral can’t get any nutrients.

The Great Barrier Reef Marine Park Authority has started the second phase of its survey to assess the impact of 2016’s bleaching.

The research showed that “22 percent of the coral on the reef died due to the worst mass bleaching event on record.”

Eighty-five percent of the mortality occurred in a 370-mile stretch of reef between the tip of Cape York and just north of Lizard Island.

The death of the Great Barrier Reef follows years of anxiety in the scientific community about how long it had left.

In 2009, the chief scientist of the Australian Institute of Marine Science, Charles Veron, held a talk called “Is the Great Barrier Reef on Death Row?”

Jacobsen wrote an obituary for the reef in Outside, in which he quoted Veron as saying:

”The whole northern section is trashed. It looks like a war zone. It’s heartbreaking. I used to have the best job in the world. Now it’s turned sour.”