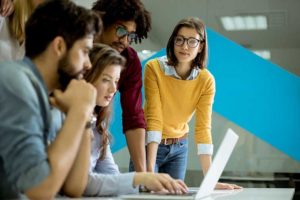 Through public participation, South African citizens have the opportunity – and the responsibility – to exercise their collective and individual right to get involved beyond elections in decision-making that concerns them or their community, and to hold authorities to account through oversight.

Citizens can and should make a contribution to the growth of our democracy at all levels of government – from a local level by engaging with their Ward Councillor and being involved in the development of their city’s Integrated Development Plan (IDP), to having their voices heard on a provincial and national level through engaging in public participation processes of the legislature.

One of the biggest responsibilities that South Africa’s democracy puts on its citizens is casting a vote in local and national elections – and not many people know how, or take the time to participate beyond ticking a box on your ballot paper. But, for under 18’s not of eligible voting age, meaningful public participation with the legislature is one of the ways they can contribute to the decisions that affect their future.

Young people between the ages of 18 – 34 constitute almost a third of the South African population. These statistics paint a clear picture that South Africa is a young country with a majority youth population – and we should be at the centre of decisions that will frame the future of the nation we will inherit. South Africa and the rest of the continent through the African Union (AU) regularly emphasise the need to “harness the demographic dividend” through investment in youth.

On a continental level, the AU started the “1 Million by 2021”, an initiative aimed at creating opportunities for young people across the continent in key areas of Employment, Entrepreneurship, Education, and Engagement. In South Africa, similar projects and initiatives run across national government departments, the National Youth Development Agency, and civil society organisations.

However, the biggest fallacy with many initiatives involving young people is that young people are on the receiving end, and not actively involved or even consulted with decision making that affects their immediate environment and future. Decisions are made for young people, and not with them. Secondly, a majority of youth leadership initiatives – especially those centred on youth public participation – are aimed at youth who are over the age of 18. This leaves a huge vacuum of untapped potential in young people who also want to be engaged and contribute towards issues that affect them, but are excluded from youth platforms for being 17 and under.

While millions of young people around the world and in South Africa have taken matters into their own hands by participating in climate strikes for instance (now the #ClimateStrikeOnline), it’s crucial that youth are engaged from a younger age on how to formally participate in legislative matters and the governance of our country – aside from looking forward to their first official vote once they reach 18.

For instance, initiatives such as the Model Legislature programme of the South African Institute of International Affairs (SAIIA) under the Action 24 Project, engage young people from the age of 14 in public participation processes, and provide them the opportunity to make formal submissions to their provincial legislature – like this one from Limpopo youth on Environmental Affairs, Tourism, and Human Settlements. Programmes such as this can support the youth in shaping South Africa’s future by raising active citizens who actively and meaningfully engage their provincial legislatures and other spheres of government from a young age.

This can ensure that young people gain an in-depth understanding of the South African legislature and its functions in our democracy and how they can play a role in all of this, while also engaging in robust debate on key issues that affect their community. I personally wish that I could have benefited from such programs when I was in high school. When an individual actively engages from a young, public and policy participation becomes a meaningful part of their lives and they understand that they are key stakeholders of the country’s democratic process – and therefore have the responsibility of ensuring its success.

Taking young people who are not eligible to vote and supporting them through public participation processes, is recognising that they are key stakeholders of South Africa’s democracy. These programmes need to break free of the lens of an extracurricular activity, and harness the potential of youth participants to benefit both young people and ultimately our society as a whole. We do not need a badge or trophy for taking part, but support in enhancing our potential, and to change the tokenistic nature of youth participation in legislative matters.

The COVID-19 pandemic has presented a challenge for every sector to do things differently, and it has also affected public participation; challenging the Legislative Sector and youth organisations to redefine what public and youth participation is and how it should be conducted.

This is a crucial time for the youth to be brought to the table. This is a key time for public participation to be introduced formally into the schooling system. It is a sensitive time for organisations looking to engage youth meaningfully and innovatively within the realities of lockdown. This can – and should – be with young people and not for them. Nothing about the youth, without the youth.