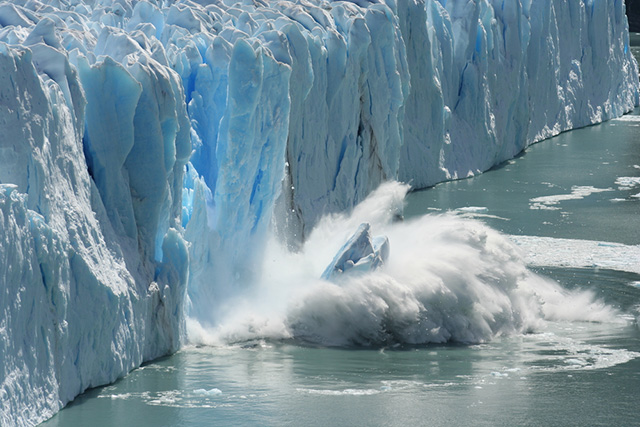 Arctic sea ice is melting at a record pace – and every summer looks grimmer. This past summer saw the ice pack at its fourth-lowest level on record, and the overall trend in recent decades suggests this will only continue.

“Using satellites, scientists have found that the area of sea ice coverage each September has declined by more than 40 percent since the late 1970s, a trend that has accelerated since 2007,” according to the recent report “Arctic Matters: The Global Connection to Changes in the Arctic” by the National Research Council of the National Academies.

The report added that by the end of each of the eight summers from 2007 to 2014, Arctic sea ice extent was over less area than at any time in the preceding three decades.

In addition to rapid melting of the sea and land ice in the Arctic, temperatures there are warming at least twice as fast as those of the rest of the planet – provoking other dramatic changes.

Massive wildfires on frozen ground, resulting from increasingly dry conditions caused by anthropogenic climate disruption (ACD), are becoming common; this phenomenon is unprecedented over at least the last 10,000 years.

These and other recent changes across the Arctic are making the weather and climate patterns there – and across the rest of the planet – more difficult to predict.

As Arctic Matters reports, “Changes in the Arctic have the potential to affect weather thousands of miles away. Because temperatures are increasing faster in the Arctic than at the tropics, the temperature gradient that drives the jet stream is becoming less intense.”

This causes the jet stream to weaken and shift away from its typical patterns, which then leads to weather patterns becoming more persistent and lasting longer in the mid-latitudes. This then results in longer droughts, more intense heat waves, and far longer and deeper cold snaps, such as those witnessed in the Northeastern United States and Europe during the last two winters.

Truthout interviewed several leading scientists on these issues, seeking a consistent expectation for what the dramatic changes in the Arctic mean. The verdict? If there’s one thing that all the scientists’ predictions have in common, it is significant change.

Dr. Julienne Stroeve is a senior research scientist with the National Snow and Ice Data Center in Boulder, Colorado. She specializes in the remote sensing of snow and ice, and works in the Arctic measuring changes in the sea ice.

“Eventually we should see an Arctic Ocean ice free in summers as global temperatures continue to warm,” Stroeve told Truthout. She expects us to begin seeing summer periods of an ice-free Arctic ice pack around the year 2040.

Bob Henson is a meteorologist with the Weather Underground, and author of The Thinking Person’s Guide to Climate Change.

He believes that while there will most likely be some small areas of year-round ice clinging to far northern Canada for decades to come, “I would expect a summer in the next 20 to 30 years in which sea ice covers as little as 10 percent of the Arctic for at least a few days in August or September,” he said.

Henson pointed out that if we extrapolate data and make predictions from more recent conditions in the Arctic, the timeline for seeing a total loss of sea ice seems faster, but he said we will most likely see summer sea ice declining “in a two-steps-forward, one-step-back process, with record ice loss in some years (as in 2007 and 2012) and a temporary, partial ‘recovery’ in other years (as in 2009 and 2013).”

Regardless of the specifics of the timeline, many agree that an ice-free Arctic will appear before the next century begins.

Dr. Steven Vavrus at the Center for Climatic Research at the University of Wisconsin-Madison focuses on the Arctic and serves on the science steering committee for the Study of Environmental Arctic Change. “The precise timing is nearly impossible to pin down, but most estimates range from around 2040 until the end of this century,” he told Truthout. “I would be very surprised if seasonally ice-free conditions during summer do not emerge by 2100.”

Dr. David Klein is the director of the climate science program at California State University, Northridge. Like others, he pointed out how the Arctic is warming two to three times faster than the rest of the planet, and pointed out how ice loss there is “proceeding more rapidly than models have predicted.”

“The loss of sea ice decreases albedo [reflectivity] and results in greater absorption of energy in the water, and the warm water then heats the air above it,” Klein told Truthout. “NASA’s CERES satellites have observed an increase of 10 watts per square meter of solar radiation absorbed by the Arctic Ocean from 2000 to 2014.”

By way of comparison, overall net planetwide warming from greenhouse gases thus far is only one-twentieth that amount of heating.

While that might not sound like very much, as James Hansen has pointed out, cumulatively that amount corresponds to 400,000 Hiroshima atom bombs per day, 365 days a year, across the planet.

Stroeve explained why the Arctic is vitally important in terms of its impact on the global climate system.

“The Arctic is typically covered by snow and ice year around,” she said. “Snow and ice have a high albedo, meaning they reflect most of the sun’s energy back out to space, helping to keep the region, and the planet, cooler than [they] otherwise would be. As the sea ice melts, or snow [and] glaciers melt, it lowers the albedo, allowing more of the sun’s energy to be absorbed by the ocean and land surfaces, further warming the region.”

Hence, all of our large-scale weather and ocean patterns are tied to the temperature difference between the poles, which receive less solar input, Stroeve said, and the equator, which receives most of the solar input.

“If that temperature difference changes, we would expect the large-scale weather patterns, i.e. the jet stream pattern, to respond,” she added. “This would then [have an] impact on precipitation patterns, perhaps frequency of extreme weather events etc.”

We are entering unchartered territory

Henson warned that we are entering “uncharted territory” when it comes to the loss of Arctic sea ice.

“The ice loss in recent years has been unprecedented since satellite coverage began in the 1970s, and all signals point to a continued decline in summer sea ice over the next few decades,” he said. “We may already be seeing the effects of Arctic sea ice loss in mid-latitude weather patterns.”

Henson warned that in the coming decades, an Arctic Ocean that is completely open for even a few days or weeks per year, could well shape the atmosphere “in ways that are not yet fully understood.”

Our ‘climate system’ is a complex interconnection of air, land, plants, sea and ice,” he said. “Any transformation to this system as large as the loss of summertime Arctic sea ice should concern all of us, especially since it could reverberate in yet-unknown ways.”

Vavrus explained how the Arctic is the “refrigerator” of the global climate system, acting as the cold region that balances out the hot tropics.

“In this role, the Arctic helps to regulate the energy balance of the climate system and the weather circulation patterns both within high latitudes and elsewhere,” he said.

He went on to point out that the most common expectation among scientists about the impact that the loss of summer sea ice will have on global climate patterns is that more solar energy will be absorbed by the Arctic Ocean and land, and the added heat from the earth’s surface will then be released back into the atmosphere during autumn and winter.

“That will then make the region much warmer during those seasons than in the current climate,” Vavrus said. “That will likely lead to a weakening of jet-stream winds and probably a wavier jet-stream flow pattern.”

This will then result in shifting jet-stream winds, and lead to more persistent and extreme weather patterns both within and outside of the Arctic, he added.

Extreme weather patterns don’t necessarily mean a universal trend toward hot weather. Henson pointed out that research by some scientists is showing that sea ice loss may be helping to cause colder mid-latitude winters like those seen recently in the Northeastern United States. Why? According to Henson, this could be because “the heat released from the newly opened ocean may be helping to slow and weaken the polar jet stream.”

Another mechanism Henson mentioned is how open water in the Barents and Kara Seas may be moistening the autumn atmosphere over Siberia, leading to heavier autumn snows and triggering a chain of events leading to midwinter Arctic outbreaks.

Stroeve said that while exact ramifications of an ice-free Arctic continue to remain unclear, “There is some thought that the warming Arctic has already led to a slowing down of the zonal wind speeds, and perhaps also causing a wavier jet-stream pattern, which would allow for more extreme (or ‘stuck’) weather patterns to persist.”

Klein pointed to how the melting Arctic sea ice “can disrupt normal ocean circulation because of the influx of freshwater from the melted ice, and rising air heated by the water can change wind patterns and even perturb the jet stream, which in turn might alter weather patterns thousands of miles away.”

Some current research states that this contributes to the extreme “polar vortex” weather events we’ve seen in recent years, in addition to the extreme drought plaguing much of the western United States.

Klein also pointed out another dramatic impact the loss of ice is having within the Arctic itself.

“With ice no longer stabilizing land along coasts, erosion will increase and fragile permafrost areas will release more greenhouse gases,” he said. “Permafrost coasts [permanently frozen soil next to open water bodies] comprise a third of the world’s coastline. This is another positive feedback leading to further warming.”

We have been warned

Stroeve pointed out that people should be concerned about the upcoming summer periods of an ice-free Arctic Ocean due to the fact that everything in the planet’s climate system is linked together, and when one part of it changes, all the other parts will respond.

“It also causes our planet to warm further, changes [in] species’ habitat/range, perhaps leading to extinction for some species,” she explained. “A change in our precipitation patterns will impact food and water security. Then, of course, there are people who live in the Arctic and are being directly impacted by these changes.”

Dr. Jennifer Francis, a research professor at Rutgers University’s Department of Marine and Coastal Sciences whose research is focused on the Arctic, pointed out how the Arctic sea ice plays a critical role in the region’s climate system and marine ecosystem. And as we’re learning, its disappearance “is having broad effects well beyond the Arctic.”

Impacts range “from weather patterns to animal migrations to ocean current systems to food webs,” Francis told Truthout. “Its loss will be felt directly and indirectly by billions of people.”

By Dahr Jamail. Source: Truth Out