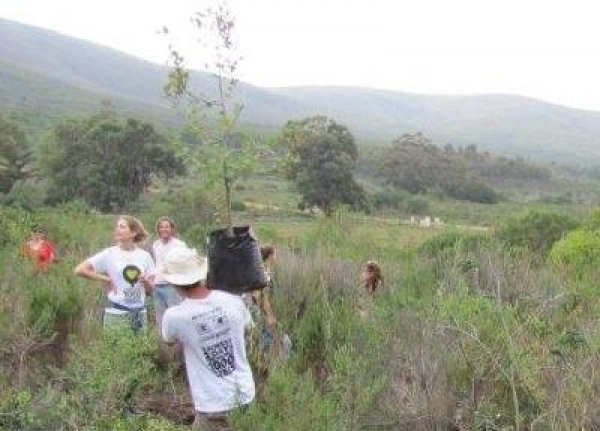 One hundred Greenpop volunteers, armed with spades and plenty of enthusiasm, gathered at Platbos – the ancient old-growth forest just a few kilometres inland from Gansbaai – to plant 1000 trees over the weekend of the 11th and 12th of June.

They travelled from Cape Town on the ‘Green Bus,’ a minibus that runs on recycled cooking oil. On arrival on the Friday evening, the tree-planters set up camp beneath the forest canopy. First thing on Saturday, the volunteers, whose ages ranged from twenty-something to sixty-something, were up and enjoying breakfast whilst marvelling at the magical forest environment.

The original intention was to plant 1000 trees on the forest edge over the course of two days, but so high-spirited were the planters that by the end of the first day of planting, 1000 endemic forest trees, supplied by the Platbos Tree Nursery, were already in the ground! As the saying goes, many hands make light work.

It was remarkable to see the demarcated field – where in years past forest had grown – transformed almost instantly back into forest. One day in the future, eagle owls will survey the Uilkraal Vallei from these very same tree tops, bushbuck will browse on their leafy branches and the Cape Batis and Paradise Flycatchers will dart between the tree trunks just as they do today in the old-growth Platbos Forest.

In the evenings, weary toes were soon energized and tapping to the marimba beats of the all-girl band Root 3. As the night grew darker, the forest was transformed into a wonder-land where fairy lights illuminated the ancient trees and a central fire burnt merrily. Later as the night wore on, Jeremy Loops, a Cape Town musician, got people dancing with his unique method of creating music on the spot with his guitar, harmonica and a loop pedal.

A small shower of rain in the early hours of the morning did nothing to dampen anyone’s spirits and after a hearty breakfast, volunteers were off to plant another 324 trees. Then it was time to gather tools and pack up tents and belongings.

All rubbish was carefully separated for recycling and organic waste was ear-marked for the nursery’s worm farm. There is a saying that asks us, upon leaving a natural area, to take only photos and to leave only footprints: in this case, the GreenPop volunteers took this one step further – they left behind them 1324 planted trees – a young forest in the making. The weekend was a huge success and all present expressed the wish to attend another Reforest Fest at Platbos soon!

The Reforest Fest was the brain child of the Platbos Conservation Trust that runs the Trees for Tomorrow Reforestation Project at Platbos Forest, and Greenpop, a Cape Town based organization that is passionate about community upliftment, urban tree planting and climate action, and they make it great fun too, so it really doesn’t feel like work at all.