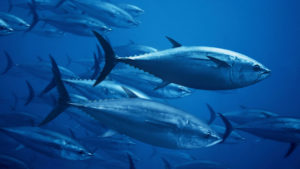 Are the words “dolphin-friendly” or “dolphin-safe” on local tuna cans truthful, considering that most of our canned tuna seems to be imported from the Philippines, or Thailand? This is also where it is very common for dolphins to get caught up in tuna fishing nets and subsequently killed. This is the issue I tried to clear up with some research.

Some fishermen purposely target dolphins while fishing to attract the tuna. This happens mainly in the Eastern Tropical Pacific Ocean where it’s common to find dolphins swimming alongside schools of tuna.

To try and curb these occurrences, the IMMP (Earth Island Institute’s International Marine Mammal Project) recently reported that they fully support a new federal fisheries rule that came into effect to extend dolphin protection from its current state.

“Thousands of dolphins continue to be killed in tuna nets every year. So weakening the US Dolphin Safe tuna standards was not an option,” said David Phillips Executive Director of IMMP. “It makes the rule uniform throughout all tuna fisheries.”

However, as bad as the situation is, dolphins are not the main concern when it comes to tuna fishing. Sustainable tuna fishing has become critical to SA and around the world.

Giant bluefin tuna is worth a lot of money at fish markets and as demand continues to grow in the sushi and sashimi markets, bluefin is greatly at risk of extinction. Bluefin have exceptional longevity, mature late and grow slowly, making them continuously vulnerable to overfishing compared to more productive marine life.

Greenpeace reported in 1999 that bluefin had been fished to the extent that only 20% remained in the sea. Recent research has shown a decline of more than 96%.

“There is no logical way a fishery can have such a high level of fishing on juveniles and continue,” said Amanda Nickson of the Pew Environment Group.

She urged for fishing of the species to be stopped immediately. “The population of Pacific bluefin is a small fraction of what it used to be and is in danger of all but disappearing.”

Yellowfin tuna not far behind

Yellowfin is not far behind. Skipjack is the most commonly found tuna in the sea and also the most common form of canned tuna found in supermarkets in SA, but if something isn’t done very soon with regards to sustainable fishing, they will go down the same route as blue- and yellowfin tuna.

Greenpeace Africa has been doing fantastic work when it comes to documenting illegal and undocumented fishing in the Indian Ocean. Since March this year their ship, Esperanza, has been sailing on the open waters of the Indian Ocean and keeping tabs on all of these illegal activities or pirate fishing as it is also known. The Indian Ocean Tuna Commission (IOTC) is currently taking place in Mauritius and Greenpeace is keeping a close eye on future developments.

Marine reserves are the only logical answer to try and curb the scourge of pirate fishing. The idea behind marine reserves is that they provide a safe sea-space for marine life including tuna and dolphins.

Over 40% of oceans should become marine reserves

Over forty percent of the globe’s oceans would have to be protected by marine reserves for it to make any visible difference. The main reason for this is the incredible rate at which the oceans’ resources are declining. The constantly increasing level of human consumption is the main cause of the decline in marine life. It remains a controversial subject around the world as demand grows while ecosystems are broken down.

Ships, sewage and human-made chemicals are also contributors to the declining ocean life.
Implementing a marine reserve in the Mediterranean Sea would also mean that the bluefin fishing in that ocean would have to be suspended until the tuna stocks have had time grow in numbers.

Responsible retailers do what they can

South African retailer, Woolworths, has started a sustainable seafood campaign in all of its stores. A statement received from Michael Basson in the WW Seafood Department says the following regarding their campaign:

“Fishing for the Future is Woolworths’ guarantee to customers that our seafood is responsibly sourced, legally caught and has full traceability.

Woolworths established the Fishing for the Future seafood sustainability policy in 2008 and soon after became the first retailer in South Africa to sign the WWF Retail Charter.

Since then we have worked closely with the South African Sustainable Seafood Initiative (SASSI) regarding seafood sustainability and have had many sustainability assessments done by SASSI in the last three years.

Woolworths was the first retailer to start labelling seafood with colour-coded logos to indicate the status of the species to our consumers. The colour-coding is now being phased out at SASSI’s request amidst concerns about mislabelling by other parties.

Despite this shift, we will continue to offer sustainably sourced seafood and avoid any other species under threat.

We have also stopped the procurement of long line Yellowfin tuna for our fresh and frozen products and launched an extensive range of MSC-certified (Marine Stewardship Council) canned seafood to complement the local SASSI programme.”

In 2012, Woolworths and the Marine Stewardship Council partnered on a nationwide consumer awareness campaign, encouraging customers to make sustainable seafood choices. The MSC is a non-profit organisation promoting solutions to the problem of overfishing and their environmental standard is the world’s leading sustainability certification for wild caught fish.

The blue MSC eco-label symbolises the traceability of a product from the shelf right back to the MSC-certified fishery that caught it. This ensures that no illegal or unsustainable products enter the supply chain.

The three principles against which fisheries are assessed are:

In addition to all this dolphin-free tuna fishing has to include the following:

How to protect dolphins during tuna fishing?

The mortality rate of dolphins has been one of the main focuses of the Marine Mammal Protection Act of 1972 and this law has been changed many times over the years to try and curb the deaths of dolphins world-wide. The “dolphin-safe” campaign started in 1990 as a direct result of a modification of the Act. Even though it has made some headway, it is not enough to ensure the safety of dolphins during fishing.

Clearly, a lot more needs to be done regarding the protection of dolphins and other marine life. New tuna fishing strategies are constantly being thought up, but won’t make a major difference if pirate fishing is not curbed first.