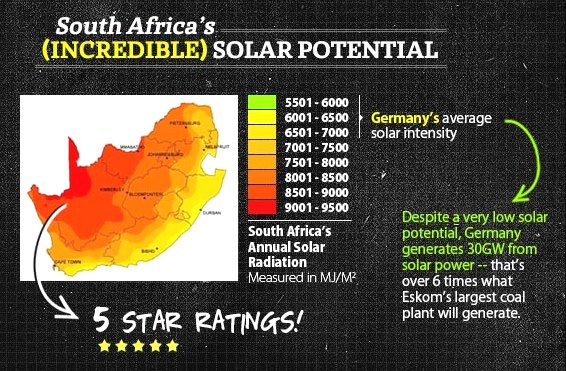 It’s time to look up, not down, for South Africa’s energy solution, says The African Climate Reality Project.

In an apparent state of conflict over its energy policies, South Africa flounders as a victim of load shedding in the grip of Eskom’s continued reliance upon coal and now also must seriously review its ‘intended nationally determined contribution’ (INDC) and declare a commitment to reducing carbon pollution ahead of the climate change conference in Paris this December (COP21).

Just as a huge defeat for ‘big oil’ was scored when Shell, in bowing to mounting opposition, pulled out of its controversial drilling operation in the Alaskan Arctic this past week, the indicators are that consumer pressure could really help bring about a universal review of how we derive our energy. Shell was ‘surprised’ and apparently caught off-guard by the force and scale of the opposition it met – and, meanwhile, the case for wind and solar energy is becoming ever more plausible and compelling.

Renewables save us R4 billion over 6 months

In the first six months of 2015, renewable energy contributed R4-billion worth of benefit in savings for SA (Source:  CSIR). Six years ago, the price of wind-generated electricity cost a third of coal power (62c compared with 168c per kilowatt hour for coal). To build a wind farm, it costs half that required to develop a new coal power station and it only takes 18 months to establish a wind farm – Eskom’s Medupi Power Station has been ten years in production and is still not operational.

According to Greenpeace Africa, renewable energy will create around 80 000 jobs annually while coal will lose 10 000 jobs. To date, the solar industry alone has created 20 000 and is set to contribute an estimated R2.9 billion to socio-economic development in rural regions over the next 20 years.

Everyone knows that Eskom cannot cope with the country’s energy demands and that its load shedding programme is having a crippling effect on the economy and causing widespread stress and discomfort to all South Africans.

The African Climate Reality Project (ACRP), which works closely with the Energy Centre of the CSIR, says that wind and sun are far more valuable as inexhaustible resources than the minerals we’ve been digging up out of the ground for energy.

More wind potential than we need

South Africa has enough wind potential alone to generate more than South Africa’s current energy needs, according to a study conducted by the CSIR’s Energy Centre. And wind has already protected us from shedding; wind energy helped to avoid more than 200 hours of load shedding in the first six months of 2015 alone, an equivalent value of ZAR1.5 billion. Added to this is the fact that wind energy saved Eskom around R300-million in expenditure on diesel and coal during the same period.

Most regions in South Africa receive more than 2,500 kilowatt hours of sun energy per square metre per year, making the country’s potential for solar energy one of the highest in the world. But SA is only tenth on the chart of countries that are effectively harnessing the sun’s energy. Germany’s at the top of the list with 1.5 million solar plants (small to large rooftop and utility scale) that yield an installed capacity of 40 gigawatts; whereas SA produces one gigawatt of installed utility scale solar capacity.

Solar is also an ideal solution for delivering power to the fifteen percent of South Africans without access to electricity. By providing homes, townships and entrepreneurs with small, portable solar panels and solar kits, South Africa could be empowering people with affordable electricity right now.

Eskom slapping a plaster over a gaping wound

Eskom currently generates 95% of South Africa’s electricity. Its crumbling plants house outdated technology that will continue to age, and in turn increase the risk, frequency and severity of load shedding. Load shedding is a symptom of larger environmental and economic issues. In South Africa, electricity insecurity is our daily reality, and it’s paralyzing our economy.

One former Eskom advisor has predicted that load shedding will occur until 2023. Patching up old plants is just a temporary fix, tantamount to slapping a plaster over a gaping wound. Meanwhile, South Africa’s power sector is responsible for nearly half the country’s carbon emissions because of its reliance on coal.

Phasing out unsustainable coal plants and replacing them with wind, solar and other clean energy technology has to be the best way for South Africa to step into the light of a low-carbon energy future, one that provides clean, affordable energy for all South Africans and protects the environment and climate for future generations.