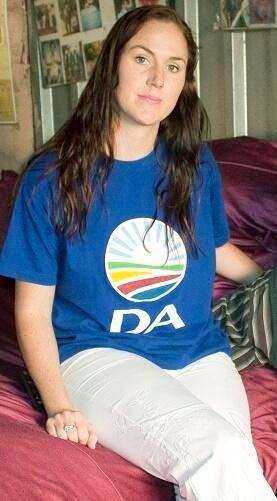 “They say that the cry of a wounded rhino never leaves you… It is the sound you hear when a rhino wakes with half its face and struggles to its feet, dazed and confused, into a fate it will never understand.”

This is an extract from Courage in the Loss of Hope By Lauren Daisy Flynn referring to a poaching incident in Kariega Game Reserve near where I live in Mpuma Coloni.  Three rhino were poached in one night. One rhino bull died during the butchery, whilst Themba and Thandi were found with their faces mutilated and fighting for their lives.

This is but one story of the 3394 rhinos killed since 2008.  Today officially marks the 736th death this year.

Last week this formed part of an impassioned speech of the DA shadow deputy environment minister Terri Stander delivered in Parliament during the debate on “Rhino poaching and its impact on South Africa’s heritage.” She continued to say:

We must ask: why is the relentless massacre of our rhino being allowed to increase? Those on my right might mock the demand or blame the black market, abuses of the permitting system, lack of funding, lack of intelligence capacity. Agreed, these are all challenges, but I call their bluff.

Ministers shouldn’t whine like spoiled children, but take responsibility. Combating rhino poaching is not a choice, but an obligation in terms of section 24b of our Constitution, which is stronger than any party manifesto.

Frilly statements can be convincing, but the lack of results is more convincing.  The only thing lacking is the genuine, collective, political will.  Ministers should stop the talk-shops and act.  The 2010 World Cup is proof of how genuine political will can direct efforts to make a success of a project that was largely met with skepticism. 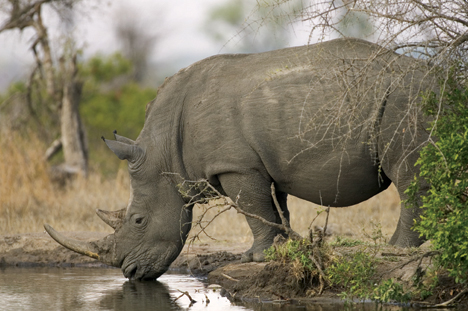 In 2010 a great National strategy for the Safety and security of Rhinoceros populations in South Africa was developed; but in four years little has come of this. The National Joint Operations and Intelligence Structure (Natjoints), and its provincial structure; have failed.

Stakeholders, including the HAWKS, SAPS, NPA and private rhino owners are operating in isolation. No one knows whom to trust with reports of the government officials, police and rangers embroiled in syndicates.  There is no credible, national, co-ordinated strategy or structure. We call on the Honourable Minister Molewa to take the reins:

Intelligence has been identified as a weakness by the department since the start of this crisis 6 years ago. Why is it, that I can have a list of 72 suspected poachers in my hands, but not one of these have been properly investigated let alone convicted?  You can even call them on the listed telephone numbers!

Gathering and analysing intelligence will support operations that disrupt organised crime and prevent poaching incidents.  It is also the one form of support that Government can provide to private rhino owners to help intercept attacks on their reserves. It is the single most important intervention.

Cabinet Ministers, we call on you to take responsibility:

Current legislation is fragmented because Provincial Ordinances differ from the National Environmental Management: Biodiversity Act and the Threatened or Protected Species Regulations. Bail amounts are paltry and do little to discourage re-offence. Sentences have improved lately. Probably a credit to the department’s efforts to provide training and ensuring dedicated Prosecutors are assigned to poaching cases. But cases still take years to finalise and the fact remains: not one poacher above level one has been arrested to date. Legislation needs to be consolidated to close loopholes and provide consistency.

We call on the Minister of Justice to take responsibility:

Legislation is only as good as it’s enforcement. Current permit regulations stipulate: “rhino hunts must take place under the supervision of a conservation official preferably an environmental management inspector from the province concerned”; but this doesn’t happen! The North West Premier’s own misconduct unit and Mukalah Governance & Corporate Legal Solutions reported that the then Deputy Director of Biodiversity Management and Conservation was complicit in permit irregularities. Instead of being subjected to disciplinary proceedings; he was promoted to Director of this department!

If reports are to be believed, special-ops troops were sent into Lesotho to evacuate the Prime Minister while our own borders lie porous and undefended. Up to 12, armed invasions originate from Mozambique in the Kruger National Park on a daily basis.

Honourable Minister Mapisa-Nqakula: I watched you on TV saying: “We are the first line of defence of the Republic of South Africa and its institutions, and equally we will be the last line of defence” As head of the Joint Security Cluster, you acted very swiftly against some errant members in this house on the 21st of August 2014 – do you not feel poachers also deserve such swift action? Minister, take responsibility!

In a joint press conference on rhino poaching, Commissioner Phiyega stated hot-pursuits were happening all the time. But when I probed the South African Police Service in our portfolio committee, it was confirmed by SAPA representatives that the hot pursuit claim was nothing but hot air. Much like the MoUs mentioned here today. Our law enforcement officials are handcuffed by the present rules of engagement.

Ministers of the security cluster, we call on you to take responsibility:

Our people, environment and economy are inextricably linked. Government must partner with surrounding communities to provide the necessary education, awareness and protection needed for the conservation of our rhino. After all, they present a long-term source of income rather than a quick cash incentive. These programmes must economically benefit the broader community, not select individuals. It is clear from recent public hearings that our people are proud that rhino form part of our heritage, and want Government to do more to stop the killings. Minister: take responsibility.

Honourable Mgximtama: perhaps if you wish to participate in this debate you need to actually attend the public hearings we have been to so that you can hear what people want, rather than grandstand your own creative opinions.

Likewise for the ANC, two people of the over 1000 who participated in the public hearings do not speak on behalf of 51 million people in South Africa on the issue of trade in rhino horn. Let me categorically state that any proposals to lift the trade ban on rhino horn at the 2016 CITES Conference of the Parties would be irresponsible. Neither legal market channels with consumer markets (where trade is currently illegal), nor the appropriate legislation and systems have been negotiated or developed. This should have been done years ago to provide the assurances that money will be used for conservation and won’t lead to an increase in poaching as in the trade of elephant ivory.

Funding is not an excuse for failing to intervene. Over R600million has been raised since 2013 toward rhino poaching with many more people, locally and internationally, willing to donate. A 1 million dollar “THREATstalker”, which is a mobile night vision, communication, etc. unit; was offered to the Kruger national Park – but they don’t want to take it!?

Government’s one-track record of “yes, we can do more” is wearing thin. Just do it!  (Apho kuko injongo kuko indlela.  Sifuna amanyathelo angqingqwa okukhusela ubhejane ezimisele nzulu kubuzwe bethu.) Where there is political will, we will find a way to combat rhino poaching in South Africa and protect our heritage as one of the conservation capitals of the world. As Dr. Ian Player has said: let us not look back in anger, but forward with fury.”