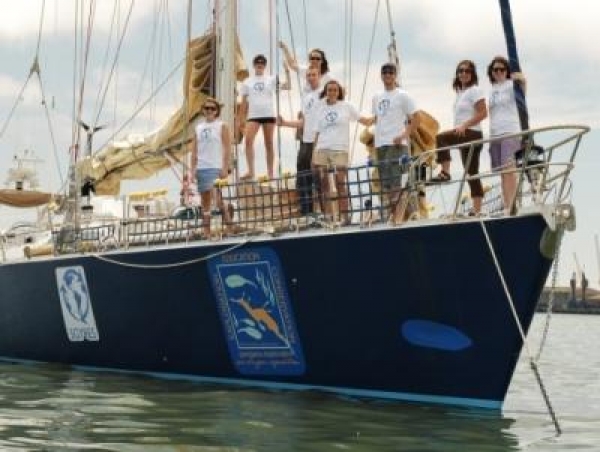 My mind was racing back to that first plastic sample we found in the ocean. Clear navy blue water filled with small coloured pieces of plastic. I stood in line at the supermarket, bursting with excitement because I had finally remembered to bring along my own shopping bag.

When is the message of sustainability going to filter through to staff at this level?

Unfortunately the shop assistant’s attitude was not what I had hoped for. She refused to let me pack my own groceries and was offended that I did not regard their new plastic bags as good enough.

From press conference to crew member

I started my internship with Green Times in December, which led me to attend a 5 Gyres Institute press conference at the Two Oceans Aquarium in Cape Town. 5 Gyres had just completed their research on plastic in the North Atlantic, and was planning another expedition from Walvis Bay to Uruguay. As fate intervened, I was invited to join the crew on their next voyage aboard Sea Dragon. On 6th January I left Walvis Bay, my first time on a boat and unsure of what we would find.

I quickly had to adjust to life on the boat. Limited walking space, a whole lot of movement, seasickness, little sleep and a lot of cooking and cleaning was on our line-up. Soon after we had gotten used to pulling up sails, winching in sheets and waking up at 02:00 to be on watch and do the log, we had to start with the science.

Stiv Wilson from 5 Gyres showed us how to tie a porous bag to the trawl, how to lift the trawl over the guard wire and let it out next to the boat. This was basically our first trawl, and it was only experimental. Then, after leaving it in the water for an hour, we dragged and winched the trawl back up and lifted it out (trust me, pulling a heavy trawl up against the currents is not easy). We released the metal ties on the sample bag, washed and scraped the contents on to a sieve, and analysed what we had found.

Small bits, almost unrecognisable, almost not even worth the name plastic anymore, but still plastic in the masses. It was disheartening. The high-pressure system in the gyre causes plastic to accumulate there. This was the first trawl, we had hardly entered the gyre, and the traces of plastic pollution were already visible.

I hadn’t expected the gyre to be this immensely big and spread-out. We trawled every 60 nautical miles (about 2 km) and found more dense plastic samples. We also found larger pieces of debris floating by. Among them were broken down plastic crates, ropes, bottles and bags. Most of their origins could not be identified, but one bottle I pulled out of the trawl had Chinese inscriptions on it.

I was astonished that marine life simply adjusted to the presence of plastic. Biomass had grown on many pieces or fish had started eating it. A huge ball of entangled ropes we found floating on the surface of the ocean soon became a shelter for a school of dorados. The ocean is like a soup of plastic, and nature is still going its course, regardless. Humans, who are the cause of plastic pollution, are the ones that are affected most.

Chelsea Rochman, a PhD student from the United States, is currently researching the chemical and toxicological aspects of marine plastic debris. Our expedition contributed to her research by keeping a sample of nurdles in the water at all times. Nurdles are pre-production virgin pellets of plastic, which do not contain any Bisphenol A (BPA).

If the nurdles test positive for certain chemicals after the voyage, it would mean the plastic pellets absorbed those chemicals.

‘I am most interested in the way that plastics both adsorb contaminants and leach contaminants from a chemistry perspective. Then there is the question of whether and how these contaminants move through the food chain as a result of plastic in the ocean?’ she said.

Clearly, the fact that fish eat plastic and we then eat the fish, is harmful to us.

‘Plastics are possibly another medium for chemicals to get into the food chain when organisms ingest plastic debris. These chemicals are not new to the water, they are in the food chain regardless of plastics, but they might enter faster with a plastic medium.’

According to Rochman, plastics contain additives from manufacturing which additionally pollutes the ocean with their presence.

‘The combo of additives and contaminants from the water makes a “cocktail” of pollutants that could have synergistic or combined effects.’

Another shock was the Sandy Bay beach in St Helena. The island’s population is small, and its surroundings are beautiful, natural, clean and untouched. Unfortunately lots and lots of plastic had washed up from the oceanic currents on one of St Helena’s beaches. The inhabitants seem deeply hurt at this sight, and I felt responsible.

Finally after 32 days, finding more than 60 plastic-filled samples and one contaminated beach, we arrived in Uruguay. I was lucky enough to be the first to see land and shout ‘land ho!’ while ringing with all my might a big brass bell that used to belong to Mark Twain. We were so happy to see the crowd of environmentalists who greeted us with enthusiasm.

We were ecstatic to be able to walk around, take a hot shower and sleep on a mattress. After a few days in Uruguay and Buenos Aires, I returned to my home country, only to find that most of our population is still unaware or unconcerned about plastic pollution.

The 5 Gyres expedition has changed my life. I am constantly aware of how much plastic we are using every day and how much of that is unnecessary. I have made some visible changes to my lifestyle, and I hope you will be inspired to do it too.