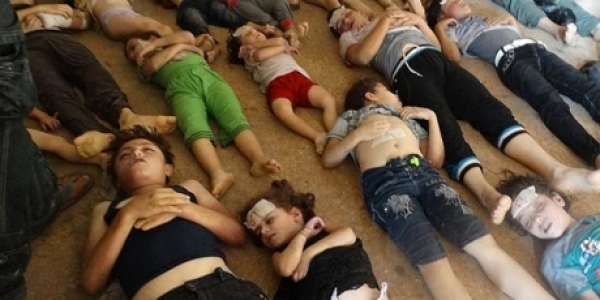 Just weeks ago the kids in this image were gassed to death in their sleep, but it feels like the world has forgotten them and got stuck in a debate between US strikes or doing nothing. Now there is a glimmer of hope for a peaceful way to stop these massacres.

Syria’s bloody war has been fueled by rivalry between Iran, Assad’s main backer, and the US and their allies. But this vile chemical attack has changed their discourse: Iran’s new moderate president condemned the gassing and Obama signaled he’d work with “anybody” to resolve the conflict. Let’s urgently call on both leaders to sit down to talks and bring the warring parties together before any more lives are lost.

Right now, the global drums of war are beating over Syria, but if enough of us make sure Rouhani and Obama know the world wants bold diplomacy, we could end the nightmare for thousands of terrified Syrian children under threat of new gas attacks. There is no time to lose.

Most brutal war of our generation

Syria’s the most brutal war of our generation, and this chemical attack on innocent civilians is the worst our world has seen in 30 years. The world has a responsibility to protect Syrians from extermination, but for two years the international community has been shamefully gridlocked and has failed the innocent victims.

Now, despite overwhelming evidence that Assad’s forces launched the attack, Syria’s backers have sown doubt and, wary of war, the world is unsure about a humanitarian intervention. These talks are a new chance to stop the bloodshed.

It’s always been believed that the US would never talk to Iran and that Iran would never help the US solve the Syrian crisis, but current evidence points to change and hope. President Obama may launch strikes, but he has no public support for a longer war, and he is looking for a way out of a sustained conflict. And 130 members of the US Congress are calling on President Obama to talk with Iran. A massive global public push for diplomacy right now could push Obama towards talks.

Iran’s former President Ahmadinejad spent billions supplying cash and weapons to the Assad regime. But the new President Rouhani was elected on a ticket to build bridges with the West and favours a political settlement with the Syrian opposition. The chemical attack is eroding Iranian public support for Assad, rekindling painful memories of Iraq’s gas attacks on Iran, and insiders say pressure is building to reconsider Iran’s support for Assad. This could be a tipping point to bring Rouhani to the table.

No quick and easy solution

Talks won’t stop the horror overnight, but there is no quick and easy solution. We urgently need to get started on a path that can stop the killing of innocent children and bring the world closer together rather than tear us further apart. Let’s get the US and Iran to start talks now.

A roadmap has already been put in motion for a Syrian peace process in Geneva, but this is the first time there could be the political will to overlook all the differences and sit down. Iran is the only country in the world with sufficient influence in Syria to push the regime to the table. And the US, with its Middle East allies, can push the opposition to sit down.

It took the horror of the Second World War to get the United Nations and the Declaration of Human Rights. Maybe the horror of Syria might finally push the US and Iran, and their moderate presidents, to address longstanding differences and build the basis for a more lasting peace for Syria and the region, with consequences for a host of global issues from nuclear proliferation to peace in Israel and Palestine.

The Avaaz community has stood by the Syrian people from the very beginning. Now they need us more than ever. Let’s give it our best shot.