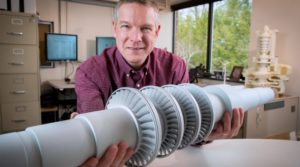 Engineers from GE Global Research unveiled a turbine that could provide power for 10,000 homes. But what’s truly remarkable about this turbine is its potential to solve the world’s energy challenges.

Typically, turbines weigh tons and use steam to run—this one is no bigger than the size of your desk, weighs around 68 kg (150 pounds), and runs on carbon dioxide.

The current design of the turbine will allow up to 10,000 kilowatts of energy to be produced; however, researchers are looking into scaling up the technology so that it can generate up to 500 megawatts, which could be enough to power a city.

To work, carbon dioxide is kept under high heat and extreme pressure. Given these conditions, the carbon dioxide goes into a physical state somewhere in the middle of gas and liquid. The turbine then harnesses the energy, transferring half of the heat to become electricity.

The design also allows for easier operation—the turbine can be powered up and turned off easily making it more efficient for grid storage, a longstanding issue for other renewable energy sources such as solar and wind power.

The result is a turbine that can generate energy in a more efficient and sustainable manner.