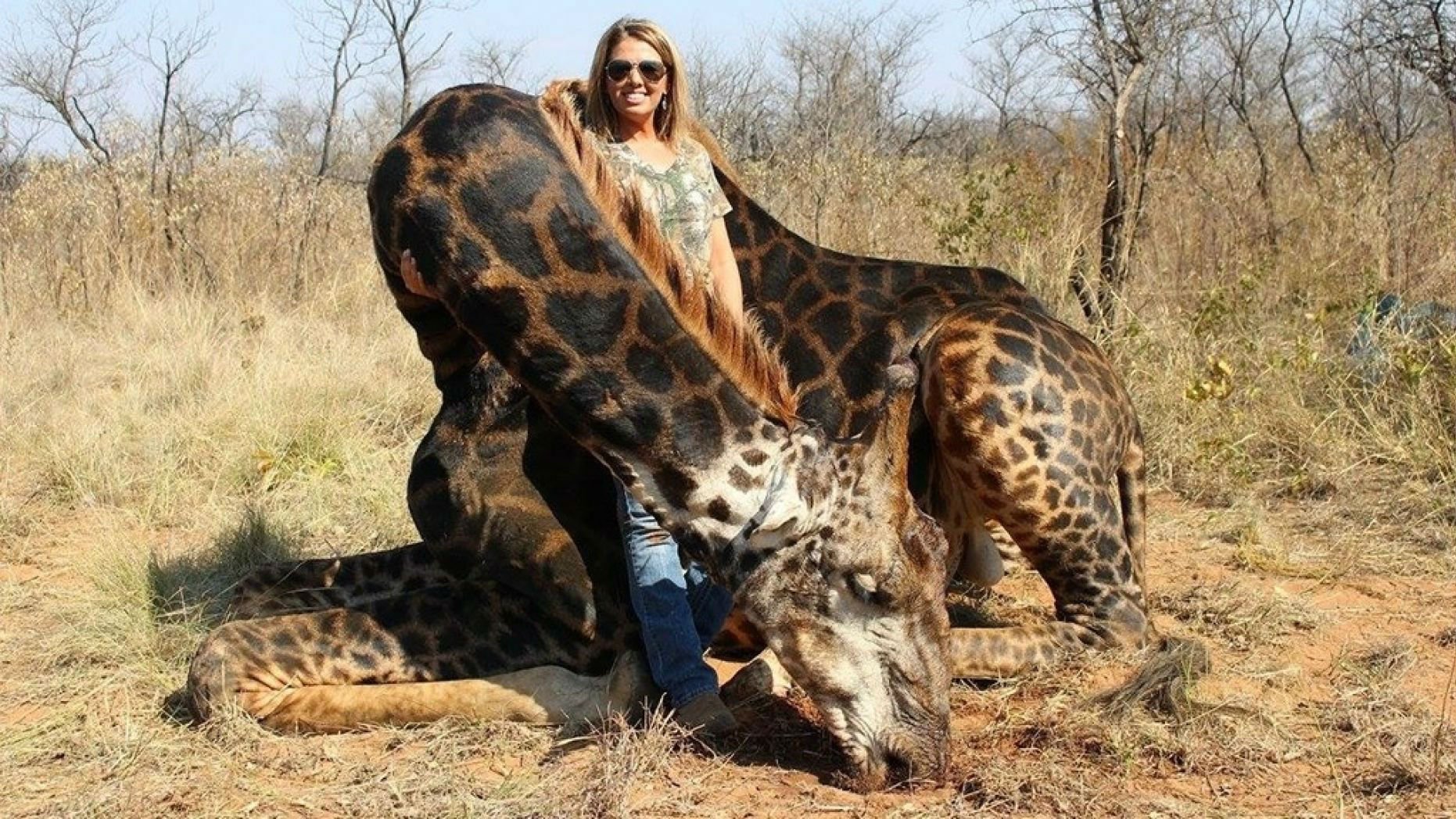 After pictures of a 37-year-old American woman posing next to the carcass of a giraffe bull surfaced online, social media exploded in disgust.

Kentucky-born Tess Thompson Talley posted the photos on Facebook with the caption: “Prayers for my once in a lifetime dream hunt came true today! Spotted this rare black giraffe bull and stalked him for quite a while.”

British comedian Ricky Gervais, who created The Office, was scathing in his response, tweeting: “What’s sixteen feet tall and has a c*** on the back of its neck?” 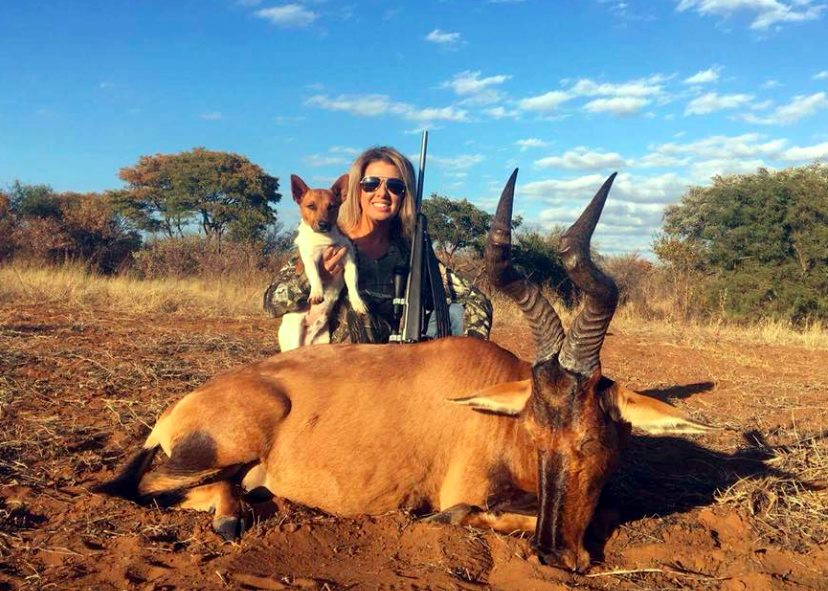 He later wrote on Twitter that “giraffes are now on the ‘red list’ of endangerment due to a 40% decline over the last 25 years. They could become extinct. Gone forever”.

An American hunter’s tasteless display is causing outrage across Africa – because giraffes are being hunted to extinction!

Rich trophy hunters are a huge part of the problem, and the US is by far the biggest importer of grisly giraffe parts like hides, tails and even bones.

But there’s a simple move to give these iconic animals a fighting chance at survival: ban these ghoulish trophies in the US, and get giraffes listed as “Endangered” worldwide! Let’s make this viral, vicious photograph the turning point to save these epic animals. 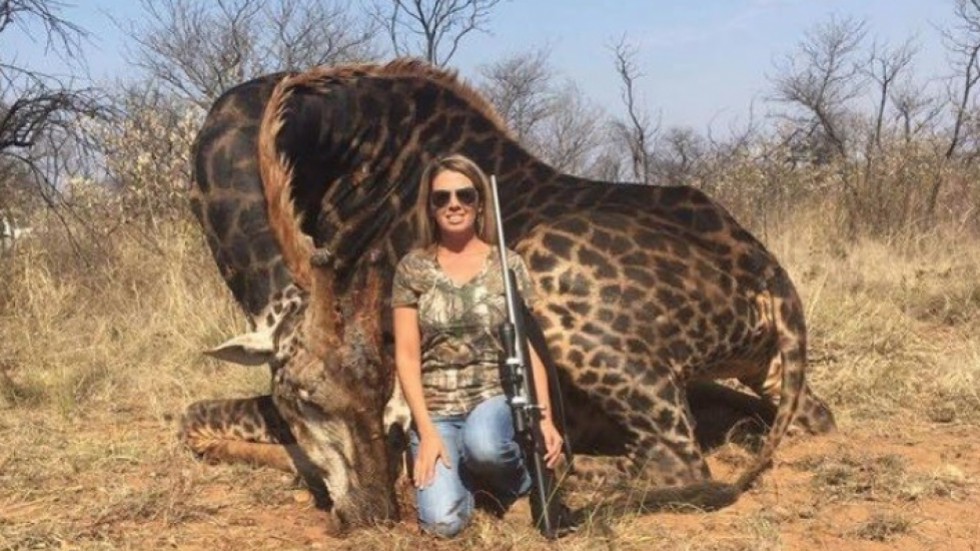 Wealthy trophy hunters, overwhelmingly from the US, are helping to drive giraffes toward extinction. It’s past time to protect this iconic animal by banning trophy imports into the US, and urgently listing giraffes as an Endangered Species!

All across Africa gentle giraffes are being gunned down for sport by rich trophy hunters, and butchered by poachers who hack off their tails to sell as dowry gifts and “good luck” bracelets. Between hunting and habitat destruction, we’ve lost 40% of the planet’s giraffes in the last three decades! They’ve already completely vanished from seven countries.

Despite this march to extinction, there are currently no US or international laws protecting giraffes against over-exploitation for trade. And if current trends continue, tone-deaf photographs of heavily-armed American hunters crouching over their kill may be some of the last photos we have of giraffes in the wild. 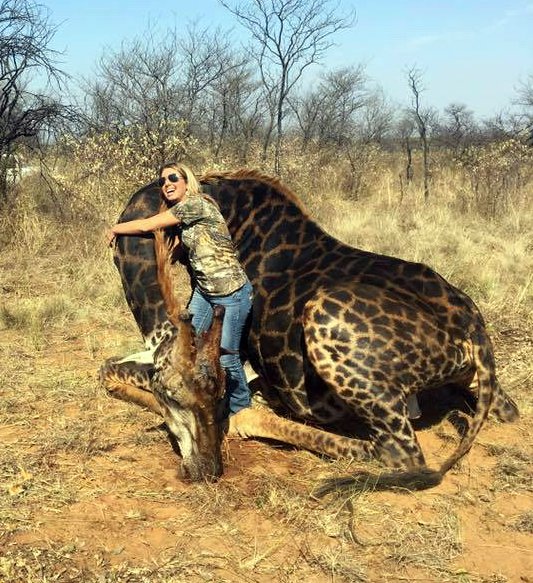 We can’t let that happen! But with an all-out advocacy blitz on the leading international conservation body, and targeted ads in Washington to get giraffe trophies banned, we can protect these long-legged legends for good. We just need enough of us on board to make a splash.

From helping to bust up ivory dealing rings across Europe to funding wildlife rangers on the front lines across the African continent, our community has acted time and again on a beautiful commitment to save as much of our precious wild planet as we can. The hits against endangered wildlife and the ecosystems that support them are coming hard and fast, but we’re not going to let any of these iconic creatures disappear without a bare knuckle fight!