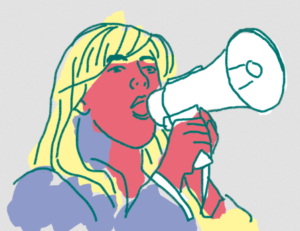 The corona pandemic has exposed the fragility of the neoliberal global economy. We will face yet another wave of austerity and unemployment, as pro-business governments raise taxes and slash spending, just as they did after the financial crash of 2008. All this on the back of the imminent collapse of global ecosystems caused by ruthless over-production, voracious agribusiness, and the deliberate exploitation of cheap, polluting carbon fuels for corporate profit. We need to challenge the growth-based and consumption-driven system of capitalism.

Measures against the climate crisis must take into consideration that women, people of colour and the working class in general are disproportionately affected by the multiple crises of the pandemic, the economy and the destruction of our ecosystems.

If we do not mobilise now – this decade – then global warming will become irreversible, ensuring that health and living standards deteriorate rapidly for most people on the planet. That is why we need a global mass movement to force governments to prevent a rise in the average surface temperature of the planet beyond 1.5°C, by 2030. And if vested economic interests seek to prevent this goal being achieved, we need a popular movement powerful enough to change the system.

Such an international movement requires goals. 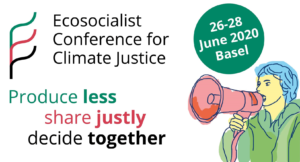 The immediate demands to fight for include:

Words and good intentions no longer suffice. Capitalism is killing the planet – literally. System change at a continental and global level is required. We need a radical, anti-capitalist, ecological, feminist, internationalist and anti-racist alternative that puts people and planet before private profit. Ecosocialism offers an alternative to the capitalist system and a future worth fighting for. 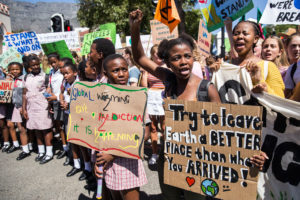 Joint and decisive action: the next steps

We think that the international climate justice movement should agree on some joint mass campaigns in the immediate future that will directly aim at a massive reduction of greenhouse gas emissions. To this end, we want to promote a dialogue with the climate justice movement, trade unions and progressive social movements. In these campaigns, climate protection, protection of people’s health and the interests of workers for decent and meaningful jobs must find a common expression.

We therefore support the mobilisation for mass demonstrations in Glasgow and elsewhere to coincide with COP26 in November 2021, and support initiatives for a Global Day of action and mobilisation for climate justice in autumn 2020.

We agree to reconvene this conference in a physical form in 2021 to develop our programme of action and our ecosocialist alternative.

Put people and the planet before profits

Fight for an ecosocialist alternative!