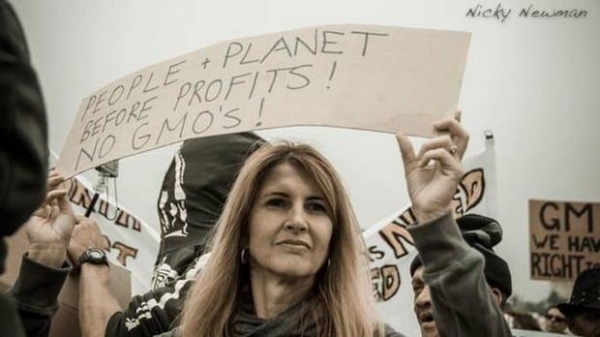 The worldwide March Against Monsanto this past Saturday was no mere political demonstration. Rather, it was a worldwide mobilization against corporate greed, the assault on our health and environment, and the oppression of small farmers.

Cape Town saw a great crowd in the streets on May 25, 2013 as the people marched against Monsanto, the pesticide giant and producer of genetically modified seeds. The march started at the Cape Peninsula University of Technology and ended at the Grand Parade square.

As the diverse crowd gathered – just as they did in hundreds of cities around the world – it was clear that Monsanto and the issue of health and food sovereignty transcends political ideology. People from all walks of life joined together to reject Monsanto and its pesticides, Genetically Modified Organisms (GMOs), and socially and environmentally destructive business practices.

However, some might wonder, why such focus on Monsanto? After all, isn’t Monsanto merely one of many multinational corporations that damage our political, economic, environmental, and physical well-being?

It’s true that Monsanto is not alone in promoting destructive technologies such as pesticides, herbicides, and GMOs – DuPont, Dow, Bayer, Syngenta, and others are also culprits.

However, due to its global dominance and ubiquity, Monsanto has become the rallying cry, the symbol for all that is wrong with our agricultural, political, and economic systems.

In recent years, the harmful effects of pesticides, herbicides, and GMOs have become well known. However, in that same time, Monsanto and its corporate brothers-in-arms have only increased their power and profits. In order to understand the extent of the problem and the role of corporations in creating and exacerbating it, one must first examine precisely how Monsanto’s products are harmful to humanity.

One of the most troubling aspects of this issue is the myriad ways in which pesticides, herbicides, and GMOs are harmful to our health. Countless studies have been conducted over the years showing a definitive link between pesticides and cancer, Parkinson’s, Alzheimer’s and other diseases. As reported by Natural Health Magazine, “Glyphosphate (RoundUp) is found in weed killers and may cause cardiovascular, gastrointestinal, nerve, and respiratory damage.”

These dangerous effects of pesticides and herbicides are not always immediately apparent, often taking decades to fully develop. Therefore, despite the wealth of research, the extent of the problem is still very much underestimated.

However, the problem is much greater in scope than simply the visible health effects.

Pesticides and herbicides, the most popular of which is the Monsanto-manufactured RoundUp, often can contaminate groundwater, negatively affecting livestock and agriculture that depend on clean water for survival. Additionally, the use of pesticides has been definitively linked to the growing epidemic of bee colony collapse, a troubling new trend that, if it persists, will have deadly ramifications for all of us as bees are responsible for pollinating at least one third of all the food humans consume. 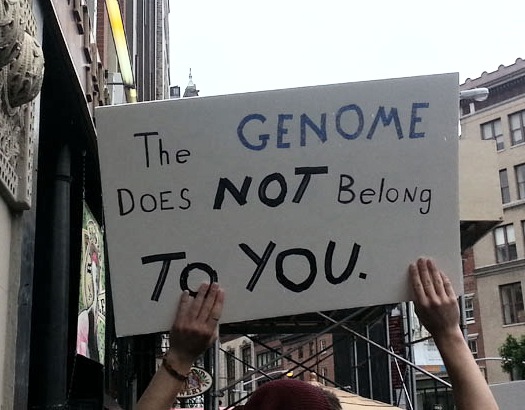 Perhaps the most controversial aspect of Monsanto and the other big Agribusiness corporations’ work is the production of genetically modified seeds. These seeds, either engineered to be resistant to pesticides such as RoundUp or to produce their own pesticides, are seen by many as a physical and environmental threat. As Jeffrey Smith of the Institute for Responsible Technology has explained:

“The genetic engineering process creates massive collateral damage, causing mutations in hundreds or thousands of locations throughout the plant’s DNA. Natural genes can be deleted or permanently turned on or off, and hundreds may change their behavior. Even the inserted gene can be damaged or rearranged, and may create proteins that can trigger allergies or promote disease.”

The negative effect of GMOs on our health is a subject that, despite having been studied extensively, still requires more research. 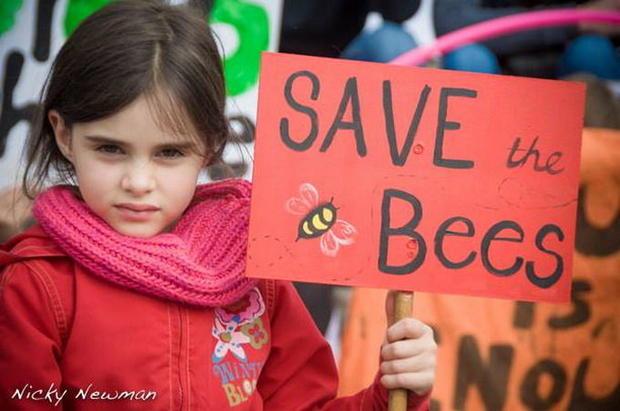 However, millions of concerned citizens, farmers and scientists agree that, in light of what we do know about GMOs, we should err on the side of caution, not on the side of profits for multinational corporations.

The oppression of small farmers

Beyond the environmental and physical damage caused by Monsanto and its corporate co-conspirators, there is the fact that small farmers all over the world are being forced or otherwise coerced into a submissive and servile position in relation to the corporate bullies on the block.

One way in which Monsanto, DuPont, et al dominate small farmers is through the monopolization of the seed supply. Using their teams of lawyers, these corporations have managed to patent the seeds and genetic codes within those seeds and, by introducing them into the seed supply, force farmers to buy their seeds season after season, or risk facing crippling litigation. 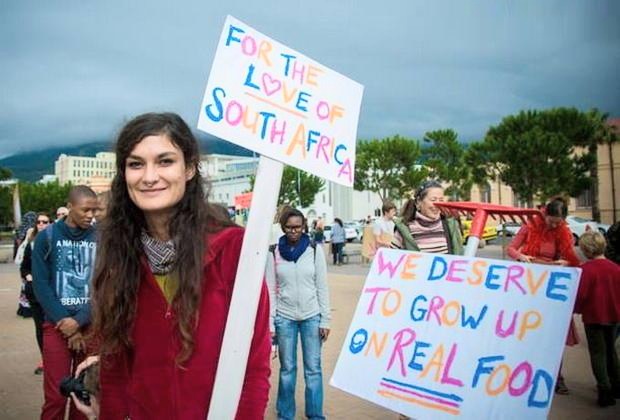 The Center for Food Safety recently issued a report entitled “Seed Giants vs US Farmers” in which it documented that Monsanto alone has “has alleged seed patent infringement in 144 lawsuits against 410 farmers and 56 small farm businesses in at least 27 US states as of January of 2013. These lawsuits, and the crippling fear of more lawsuits, has forced small farmers who could never afford to challenge Monsanto in the courts to simply acquiesce to their demands.

Moreover, many of these farmers might be “infringing” on patents through no fault of their own as the genetically modified seeds penetrate the fields of the non-GMO farmers through natural processes such as wind. Essentially then, what Monsanto has created is a closed system wherein they and their corporate cousins control most agricultural production either through the seeds or by extracting income from farmers who are unable to defend themselves.

It should be noted that many of the small farmers who fall victim to this kind of extortion are in the Global South.* 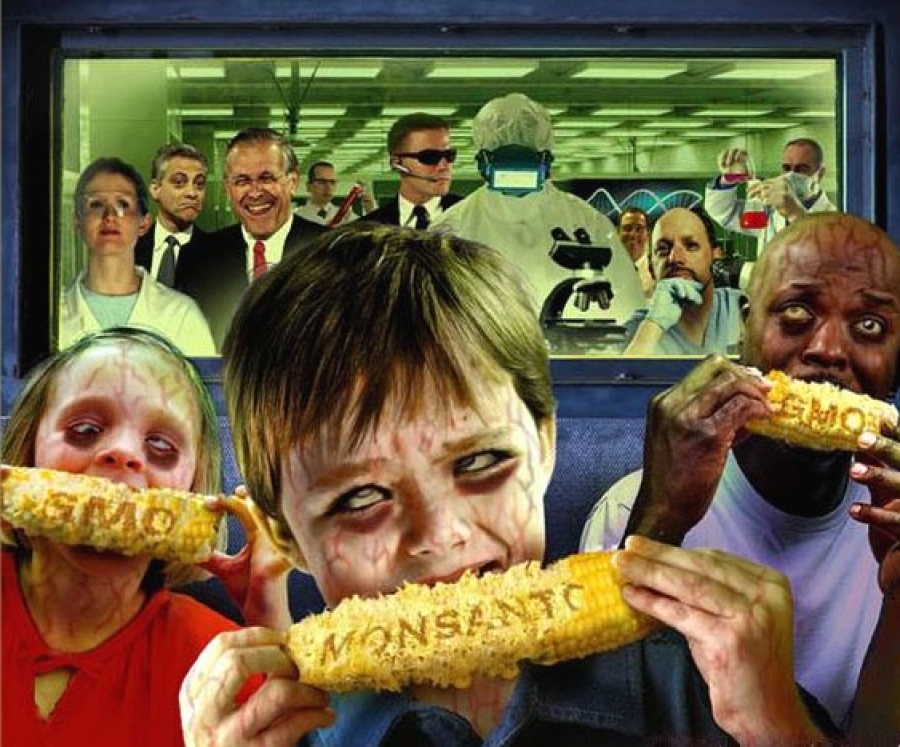 Rural peasants in India and South Africa, Brazil and Mexico, and many other parts of the developing world, are being forced into this deadly corporate system. Without the means to defend themselves, and with governments that often act as willing executors of the demands of powerful corporations such as Monsanto and others, the rural peasant class has no choice but to use the GMO seeds.

The health and environmental impact of this shift, along with the destruction of traditional indigenous methods of agriculture, is being painfully expressed throughout the world.

This weekend’s marches against Monsanto were a wonderful demonstration of the popular anger over the monopolization of agriculture by corporate interests.

Hundreds of thousands marched through the streets of hundreds of cities around the world demanding an end to the poisoning of our bodies, our children, and our environment. In New York, for example, the march was punctuated by chants of “Hey hey, ho ho…GMOs have got to go” and “Hell no G-M-O…hell no G-M-O”, as men, women, and children marched in a long, unbroken line of citizens unwilling to swallow the lies and poisons they’re being fed. 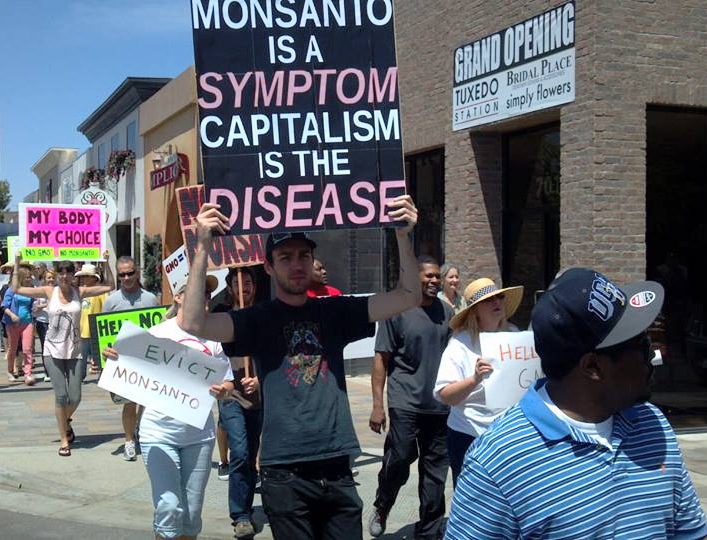 However, what is missing from many of the articles being written by concerned journalists and bloggers the world over is the fact that the fight against Monsanto and corporate control over the global food system is not relegated to one day of demonstrations. Rather, this resistance struggle has been ongoing and, for small farmers, this is an existential struggle. Organizations such as La Via Campesina have been working tirelessly to advocate the rights of peasants around the world.

As the organization wrote in its recent report entitled “Combatting Monsanto”:

“With the current economic and environmental crises, global resistance against transnational corporations has become an urgent necessity.A fair society organized to address the people’s needs and guarantee their rights cannot be built in co-existence with corporations that grab power and finite resources. We are calling for collective action from all of those who share our vision of a sustainable world. There has never been a more important time to globalize our struggles and globalize hope.” 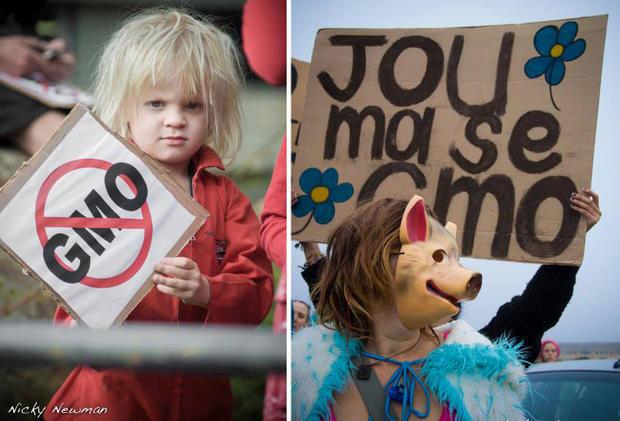 La Via Campesina, which represents more than 200 million farmers, workers, and activists all over the world, is a powerful symbol of resistance against Monsanto and the domination of agricultural production by the interests of industrial and finance capital.

More to the point, this organization and others like it, give voice to the voiceless masses toiling in the fields the world over. For the millions of small farmers who reject GM seeds and pesticides in favor of traditional organic farming methods, this resistance struggle is in fact a struggle for their very survival. 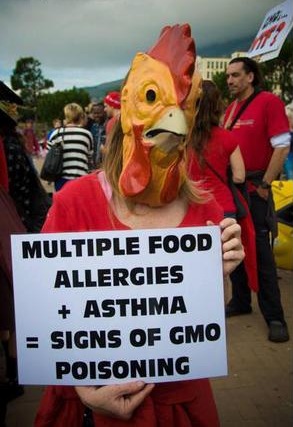 Ecocide is the extensive damage to, destruction of or loss of ecosystem(s) of a given territory, whether by human agency or by other causes, to such an extent that peaceful enjoyment by the inhabitants of that territory has been or will be severely diminished.

*The nations of Africa, Central and Latin America, and most of Asia are collectively known as the Global South.