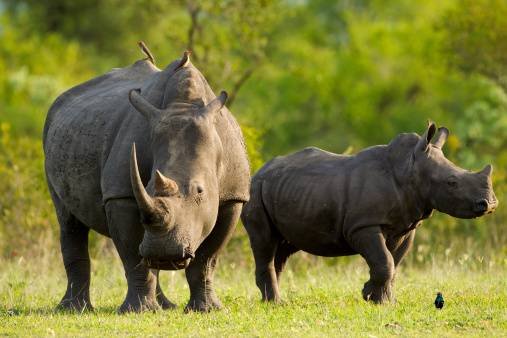 With rhinos on the brink of extinction, it is no surprise that amazing conservation efforts are attempted in Africa to save them. Enough so to be noticed by an international panel of judges. Raoul du Toit, International Rhino Foundation’s African Rhino Programme Coordinator, has received the prestigious Goldman Environmental Prize (Africa). The award recognises individuals from six regions around the world for sustained and significant efforts to protect and enhance the natural environment, often at great personal risk.

Du Toit has been rewarded for his courageous work in developing and maintaining the largest remaining black rhino populations in Zimbabwe. Thanks to Du Toit the black rhino population in Zimbabwe has increased four-fold since 1992. He noticed the ever looming poaching and habitat threats to these highly endangered species and started moving them to safer areas and established breeding programs.

The majority of these rhinos live in lands associated with the Lowveld Rhino Trust, which was established by du Toit in 2009 with support from the International Rhino Foundation. These areas are now home to about 80% of Zimbabwe’s total rhino population and contain both private game parks and publicly protected lands. According to Du Toit healthy populations of rhinos enhance biodiversity and wildlife-based development in Africa’s semi-arid regions. He set out to promote innovative models for rhino conservation linked to rural development in his native Zimbabwe.

‘We have fantastic animals in Africa that deserve to live and not be wiped out by greed. We have to save these animals for the future generations.’

Du Toit’s crew educates children about environmental awareness, instills local pride that rhinos share their home, and links financial support for schools to rhino births. For Du Toit, the birth of every rhino is a heart-warming achievement, especially if that birth represents some tangible gain for impoverished people upon whose attitudes the future of Africa’s wildlife and wild places depends.

Unfortunately, his efforts have suffered setbacks. 100 rhinos have recently been poached in Zimbabwe. According to Erica Gies from ‘Way Out West’ news, a video showed the desecration – a bloody, minivan-sized animal on its side, legs jutting stiffly into the air, while a baby rhino stood by for days, trying to nurse.

‘The most recent poaching victim, last week, was found with its horn hacked off its face, still alive,’ Du Toit says. ‘Animals deserve better from the human race,’ he says.

Fortunately Du Toit’s organisation has managed to raise the baby and release it back into the wild.

In South Africa, rhino poaching is much more commercial and sophisticated with large private sectors.

‘South Africa has more elaborate, expensive techniques such as shooting rhinos from helicopters and poisoning their watering holes. At the same time, they have a larger rhino population, so the situation is not yet as dire as it became for us in Zimbabwe,’ Du Toit says. ‘In South Africa poaching is going up and it will eventually make an impact.’

In Zimbabwe, there are two kinds of poachers:

‘Poaching is an economic activity – it’s a balance of reward and risk. When we look at poaching analytically, poachers risk being arrested or even shot but they risk this because the value of the horns is so great.’

The average the international market pays for rhino horns are about R28 000 per horn.

Zimbabwe is winning the battle against poaching

In 2000 Robert Mugabe’s land policy allowed subsistence farming initiatives to expand into the conservancies; a big knock for conservation efforts. This led to a sharp increase in the rhinos poached and illegal horn trading. With the devaluation of Zimbabwean currency, funding for conservation projects has disappeared. Breeding projects and rhino protection is placed mainly on the shoulders of the private sector, since the amount of tourists entering Zimbabwe to view rhinos has vastly decreased over the past few years.

Du Toit is committed to his project, regardless of the unstable political situation in Zimbabwe.

‘My life has not been more in danger than anyone else in the country. The work with rhinos is the same in war and peace. The country in itself is dangerous, but not only for those who work in wildlife conservation.’

He mentions that they have a lot of policemen that really care and are committed to saving the rhinos.

‘In general the law enforcement agencies don’t directly poach. More often the corruption is in taking bribes from the organised criminals.’

‘We are winning this battle and stabilising the rhino population again. There are currently more than 440 black rhinos in Zimbabwe.’ Du Toit’s team is also working in other countries, restocking and rebuilding populations in Zambia and Botswana.

‘We’re not just trying to protect rhinos in Zimbabwe but help other regions as well so we can grow the population as a whole.’

Zimbabwe is currently home to the fourth largest rhino population in the world.