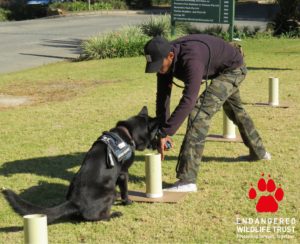 this year is again marred by horrendous statistics illustrating the poaching pandemic across the African continent.

According to the Department of Environment, Forestry and Fisheries (DEFF), since 2008 some 7,900 black and white rhinos have been slaughtered for the illicit trade of their horns.

The fight against poaching has been arduous and continually poignant but positive strides are being made through advances in technology, alongside increasingly sophisticated and innovative techniques being employed by authorities to more effectively address this persistent threat. The Conservation Canine Project is the longest running of several projects, which the Endangered Wildlife Trust (EWT) Wildlife in Trade Programme implements to combat wildlife crimes including those involving rhino.

“We have 14 dogs strategically placed across South Africa to stop poachers and rhino horn smugglers. Our detection Conservation Canines are trained to detect and indicate various wildlife contraband such as rhino horn and ivory as well as ammunition.”

The dogs are used at wildlife reserve gates to search hundreds of vehicles, people and their luggage each month, as well as crime scenes. They are trained to track humans through the bush, by following tracks when breaches in the reserve boundaries have been noticed or to track poachers from poaching scenes to apprehend them. 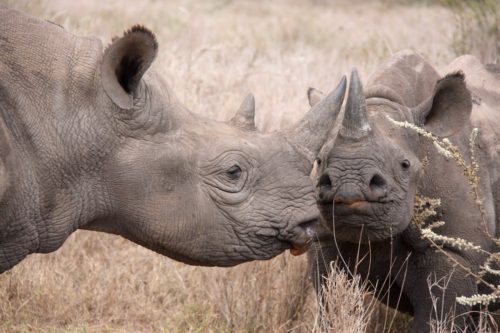 Dore continues, “The overarching outcome of this project is to ensure that Conservation Canines are strategically placed across South Africa’s private, provincial and national parks across South Africa as well as ports of entry and exist.”

EWT’s long-running partnership with NPO Relate Bracelets has provided direct, continuous support for our Conservation Canine Project, which plays a critical role in the protection of South Africa’s wildlife while providing support to anti-poaching efforts.

Relate has manufactured 11 bracelets for specific EWT causes, including the Rhino Project and Guard Dogs for Conservation. 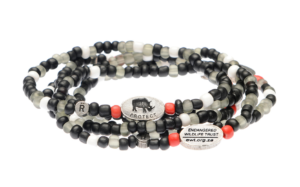 “The poaching crisis across Africa is severe,” exclaims Dore. “Combating the illegal wildlife trade has required a great deal of thinking out of the box.

“Rats have proven to be highly effective allies in detecting landmines and tuberculosis in different parts of the world, so this project focuses on harnessing the amazing detection skills of these animals, as a new and novel method for detecting wildlife contraband. This project is still in a proof of concept phase, which we are concluding the most recent development stage of their training, but we have so far proven that the rats can detect pangolin scales and an African hardwood,” said Dore.

“We’re at a critical point in our country’s conservation history – rhino conservation and wildlife protection is part of our collective heritage and we all have roles to play in preventing this natural component of South Africa’s identity being completely wiped out.”

“Support for EWT, through bracelet sales and individual donations, is channelled directly into the operationalism of their projects. Relate has raised more than R2.2 million for EWT since our partnership began in 2012, but it takes a unified front from all South Africans, all year round, to ensure the survival of our natural world,” stated Robinson.