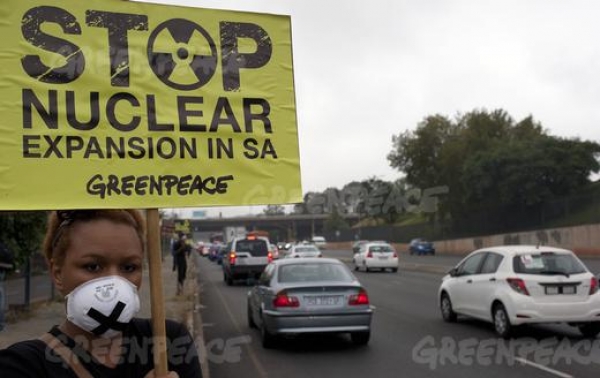 Earlier this week, Greenpeace Africa commemorated the 2nd anniversary of the Fukushima disaster with a call to the South African government to ensure transparency and accountability in the nuclear build process.

Early on Monday morning, Greenpeace activists staged a silent protest on Johannesburg’s Empire Road. The activists, dressed in black with stickers across their lips held posters reading ‘NOT ANOTHER FUKUSHIMA’ and ‘SECRECY IS FOR SKELMS’ to oppose the ongoing secrecy within South Africa’s nuclear build programme and to urge the South African government to pass legislation that holds nuclear industry liable for any nuclear disaster.

On March 11 2011, an earthquake struck off the coast of Japan, followed by a tsunami triggering the biggest nuclear disaster since Chernobyl in 1986. One week later the SA government released its Integrated Resource Plan announcing its intention to add 9600MW of nuclear energy to the grid. Since the IPR announcement, the nuclear build process has been plagued by secrecy. 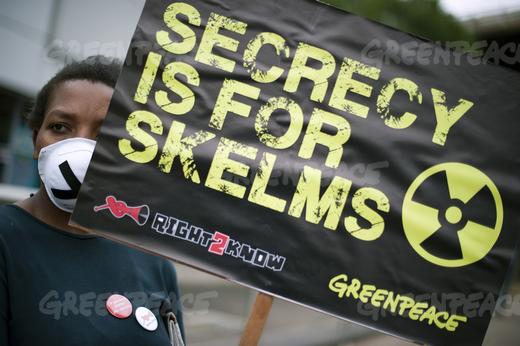 “The Fukushima nuclear disaster revealed considerable corruption in the nuclear power sector. It is however clear that the South African government has not learnt from the Fukushima disaster – not only in terms of the enormous cost and safety but also in terms of the ongoing secrecy,” said Ferrial Adam, Greenpeace Africa climate and energy campaigner.

Two years into the ongoing Fukushima disaster, hundreds of thousands of victims in Japan are still denied fair compensation from a regulatory system that allows the nuclear industry to evade its responsibilities and forces the public to pay for its disasters.

In order to prevent a similarly flawed nuclear build process in South Africa, Greenpeace Africa submitted two requests to the Department of Energy in 2012 for access to information (PAIA), to get a full understanding of South Africa’s nuclear plans. Both requests were treated with disdain – the first application was refused and the second was not responded to. 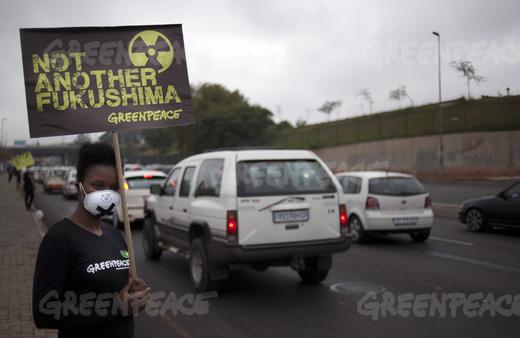 “Our government continues to operate in a shroud of secrecy by withholding basic information. If we are serious about a clean, safe energy future then the needs of our people must be put ahead of that of the nuclear lobby” added Adam.

“Greenpeace calls on the South African government to stop its nuclear plans and transform rhetoric to true commitment in expanding the renewable energy sector. Wind and solar energy are the best alternatives for South Africa in terms of cost, job creation and a cleaner future,” concluded Adam. 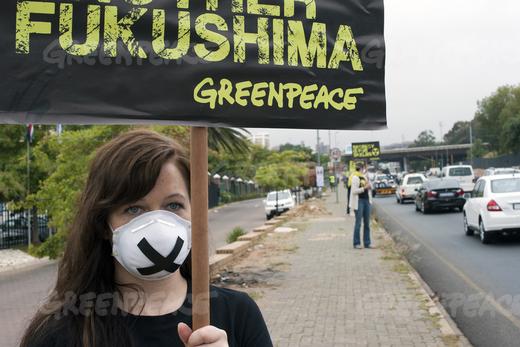