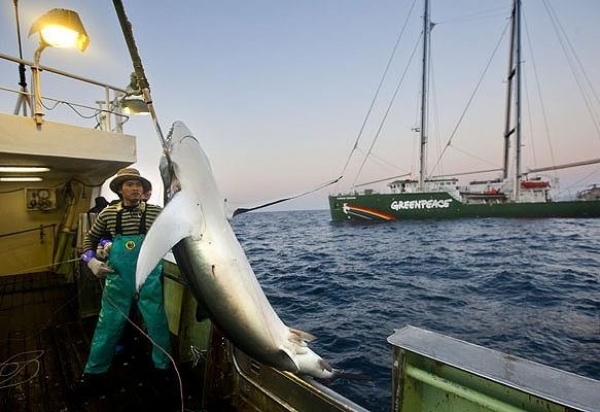 Foreign fishing vessels are stealing fish from the Indian Ocean, and depriving local communities of their livelihood.

The Greenpeace flagship Rainbow Warrior ended on Monday its two-week cooperation with the Mozambican Ministry of Fisheries. The organisation had been patrolling the country’s waters and facilitating inspections of foreign fishing vessels that mainly target high-value tuna and endangered sharks in Mozambique’s waters.

Due to limited resources, vast areas of Mozambique’s waters are not closely monitored, creating an opportunity for illegal and unreported fishing.

“Currently fishing fleets are plundering the Indian Ocean of tuna, sharks and other ocean life. Vessels which repeatedly fail to comply with the rules must be stopped. Our oceans and the billions of people dependent on them for food and jobs need proper control and enforcement of fishing regulations,” said Paloma Colmenarejo, Greenpeace International campaigner on board the Rainbow Warrior.

During the joint surveillance, an area of 133,500 km2 was covered and four foreign vessels were inspected. Three were Japanese and one Spanish.

One of the Japanese vessels, the Fukuseki Maru N° 27, owned by the Fukuseki Maru Co. Ltd., failed to co-operate and allow enforcement officals to weigh shark fins found onboard. This is an infiringement of its licencing conditions and the Mozambique government is currently considering further legal proceedings. 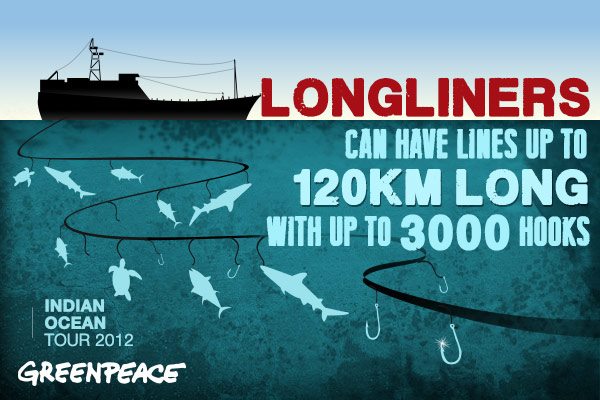 Longliners in Mozambique waters target mainly albacore tuna as well as bigeye and yellowfin and also swordfish, and sharks for the lucrative fin trade. Albacore tuna is being overexploited in the region and many shark species are endangered. Indian Ocean albacore is caught almost exclusively with drifting longlines. The lack of proper management and pirate fishing are contributing to the demise of these species.

“Illegal fishing is a massive problem in waters of coastal states with limited capacity to monitor these vessels’ activities. It is stealing fish from the Indian Ocean and deprives coastal states of much needed income,” added Colmenarejo.

João Noa Senete, Head of the Fisheries Surveillance Operations Department at the Mozambique Ministry of Fisheries, added: “Illegal fishing affects fishing communities and squanders resources at the expense of future generations. That is why we think this joint mission with Greenpeace International may contribute to minimising or eliminating illegal, unreported and unregulated fishing, maximising economic benefits from fishing and the sustainability of fisheries resources.”

Greenpeace is calling on key market players and tuna brands to ensure they have a traceable supply chain and only source tuna that is legal and comes from sustainable sources.

Greenpeace is continuing its mission in the Indian Ocean to highlight the problems associated with excessive tuna fishing, unsustainable fishing practices, and the need for countries to cooperate and ensure that communities will benefit from the wealth coming from the oceans in the future.