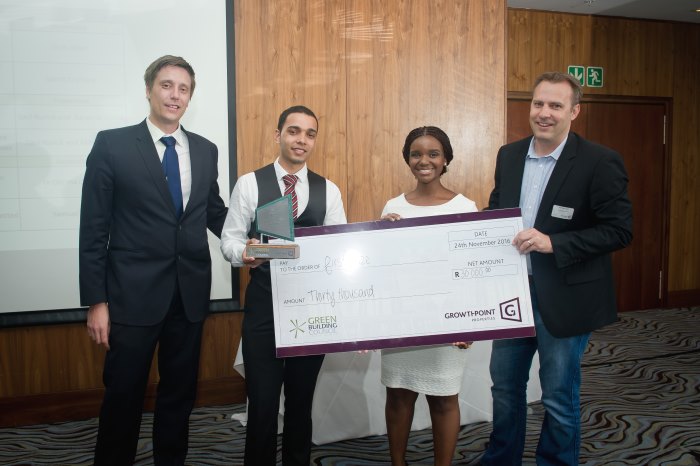 Young environmental visionaries from the University of Cape Town took first place in the Growthpoint Greenovate Awards for the second year running.

The awards recognise innovative solutions for the property industry to environmental challenges.

Now in its second year, the awards programme is an exciting initiative by Growthpoint Properties in association with the Green Building Council South Africa (GBCSA). It inspires and encourages students of the built environment to discover, explore and invent ways to live more sustainably.

Students were challenged to come up with ideas for any property-related project that makes the way we live greener and our environmental footprint lighter. Groups from each of the participating universities competed internally first and the two top projects from each were chosen as finalists.

The winners were announced at a gala dinner in Sandton Central with keynote speaker, trend analyst Dion Chang of Flux Trends, who warned: “If you don’t take the time to think proactively, you will increasingly find yourself reacting to your environment rather than influencing it.”

The UCT team of Cédric Fournier and Priscilla Nthai, with supervisors Saul Nurick and Abby Street, were named the winners of the Greenovate Awards 2016. They focused on the perceptions of occupants in office buildings that contain green building features and initiatives.

This team of outstanding young green innovators took home R30,000 in prize money. They will also be fully sponsored to attend the GBCSA’s Green Building Convention in Cape Town in 2017 where they will present their research to local and international property professionals and green leaders.

The University of the Witwatersrand team of Nthabiseng Makgabo and Bongiwe Dlamini, supervised by Samuel Azasu, scooped second place with their comparative analysis of the factors that influence the choice between green and conventional buildings in selected nodes in Gauteng. The team earned a prize of R15,000 for their insightful project and tickets to the Green Building Convention in 2017.

The third placed young green thinker came from Nelson Mandela Metropolitan University. Lungela Gcwabaza, supervised by Gerrit Crafford, investigated the obstacles to effective implementation of strategy within quantity surveying firms as a method for enhancing business sustainability in the long run. He won R10,000 and tickets to the Green Building Convention 2016.

Werner van Antwerpen, head of sustainability at Growthpoint Properties, explains: “By nurturing innovation for a greener, healthier, more sustainable environment, everyone wins. The Greenovate Awards is producing pioneering student projects that show new ways to drive green building thinking forward, to ensure a better, greener future. Growthpoint is proud to collaborate with GBCSA, the universities, and their students to provide a platform to shows and grows green innovation.”

Van Antwerpen was part of the judging panel that comprised some of SA’s top green minds, including:

Brian Wilkinson, GBCSA CEO, says: “GBCSA is thrilled to partner with Growthpoint for the second consecutive year on the prestigious Greenovate student awards. They recognise and reward some of South Africa’s top students, who are the future green leaders and innovators in South Africa and are set to change the way the world is designed, built and operated for the sake of our environment and future generations to come.”

The ways in which the Greenovate Awards is building a better world go well beyond its annual competition.

Nurturing green innovation, GBCSA has offered discounted Accredited Professional Training at universities since 2013. This has consistently grown each year, expanding from one university and 45 property studies students in 2013 to five universities and over 250 students in property, construction management, architecture, interior design and quantity surveying in 2016.

Donné Atkinson, Education and Training Manager at GBCSA, says: “The Greenovate Awards have certainly added to the motivation to attend the programme. Much of the growth has occurred in the last two years and we expect this will grow even further in 2017. GBCSA is thrilled that, this year, over 250 graduates will enter the marketplace with awareness around how the design, construction and operation of the built environment, when done right, can mitigate against climate change and reduce humankind’s negative impact on the environment.”

The success of the competition will continue to see the awards programme becoming even bigger in future.

Van Antwerpen reports: “Ultimately, the Growthpoint Greenovate Awards programme will be made available to all universities in the country with the appropriate built environment faculties. In addition, in 2017, it will be adapted and expanded to other faculties too, to recognise and encourage environmentally innovative thinking among even more of South Africa’s future leaders.”

Growthpoint is the largest South African primary listed REIT and strives to be a leading international property company providing space to thrive. It creates value for all its stakeholders with innovative and sustainable property solutions. Growthpoint is a Platinum Founding Member of GBCSA and a member of the GBCSA’s Green Building Leader Network, and has been included in the FTSE/JSE Responsible Investment Index for seven years running. It owns and manages a diversified portfolio of 526 property assets including 467 properties in South Africa, 58 properties in Australia through its investment in Growthpoint Properties Australia (GOZ) and a 50% interest in the properties at V&A Waterfront, Cape Town.

Founded in 2008, the Green Building Council South Africa (GBCSA) is one of over 95 members of the World Green Building Council. It exists to inspire the property industry to design, build, operate and tenant better, greener buildings. GBCSA operates in the commercial, residential and public sectors. Its aim is to work with its membership community to sustainably transform the built environment, and strives to preserve the planet for future generations through advocacy, membership, certification and training. The GBCSA is the official certification body for Green Star SA and EDGE residential projects.