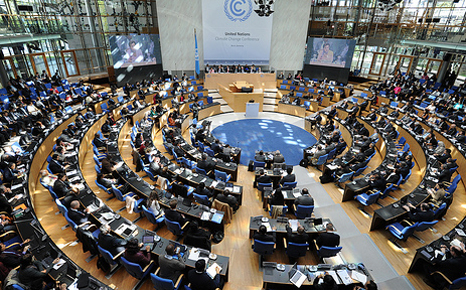 More than 250 organizations, movements and communities from developing countries have called on the United Nations’ Green Climate Fund (GCF) to ban the use of its funds for fossil fuel and other harmful energy projects and programs as it gathers for its 7th Board Meeting.

“To use climate funds to finance fossil fuel and other harmful energy projects is totally unacceptable,” said Lidy Nacpil, Coordinator of Jubilee South Asia/Pacific Movement on Debt and Development (JSAPMDD), a member of the Global Campaign to Demand Climate Justice that helped coordinate the world-wide response.

“We are organizations, movements and communities from developing countries whose citizens bear the brunt of the most harmful consequences of climate change. All efforts must be made to ensure that climate finance is provided adequately, allocated equitably and used effectively,” Nacpil said.

“People across the world are calling for an explicit policy that GCF funds will not be used directly or indirectly for financing fossil fuel and other harmful energy projects or programs that are most of the time detrimental to the health and environment of the poor,” said Mithika Mwenda, General Secretary of the Pan African Climate Justice Alliance and Global Campaign member.

“We urge the GCF board to adopt an ‘exclusion list’ as part of environmental, social, gender and financial safeguards and protection policies,” Mwenda added.

Civil society observers of the Fund noted with alarm that like other international financial institutions the GCF may rationalise funding climate-polluting projects because of “lower carbon” energy or because they switch to “lower emissions” fuels rather than truly sustainable options.

Supported by over 50 civil society groups

The call was supported by more than fifty civil society groups from developed countries in Europe, North America and the Pacific.

“Financing any fossil fuels and harmful energy through the Green Climate Fund is fundamentally in conflict with what people the world over are demanding, what the mandate of the founding document of Green Climate Fund actually says, and with climate science and common sense,” said Asad Rehman, Head of International Climate at Friends of the Earth EWNI.

“For the Green Climate Fund to have transformational impact, as it says it wants, it should not promote “business-as-usual” energy solutions. It has to step away from the failed corporate model of energy services and open up real, people-controlled, community power solutions,” Nacpil concluded.

Formally launched in 2010, the GCF is under pressure to open for business in 2015.

Currently it is a Fund without funds, as rich industrialized countries drag their feet in fulfilling their obligations under the UN climate treaty to provide up to $100 billion of climate finance a year.